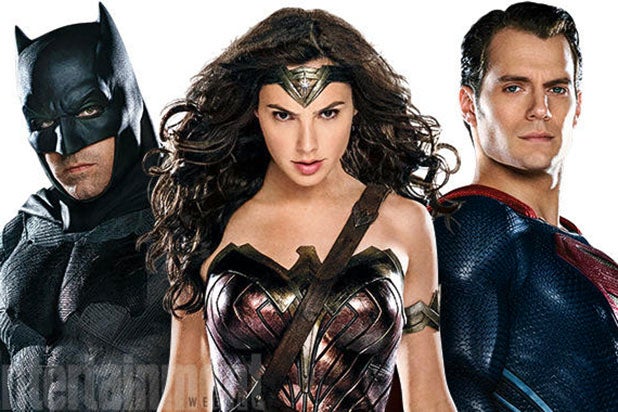 Wonder Woman is front and center between two of the biggest superheroes in the world in the latest look at the stars of “Batman v Superman: Dawn of Justice” in costume.

In the cover story, director Zack Snyder shares the movie’s origin story, and explains how it grew from a small Easter egg into a huge crossover movie in the DC universe.

“I said, ‘What about at the end of the movie we do a scene where there’s a crate full of kryptonite delivered to Wayne Manor,'” says the director. “Everyone was like…’Okaay.’ Once you say it out loud it’s a problem because you can’t unsay it.”

In August, Warner Bros. announced ten movies it would be releasing between now and 2020, in addition to “Batman v Superman.” Among the projects revealed was a two-part “Justice League” movie directed by Zack Snyder.

And Snyder says that building such a massive franchise is no easy feat. “Do you know that race from Death Valley to the top of Mount Whitney? It’s, like, 100 miles and it’s from the lowest point in the continental United States to the highest. It’s crazy. Anyway, it’s like that,” he says.

When Affleck spoke to EW, he teased a “sexy scene” between Bruce Wayne and Wonder Woman’s alter ego, Diana Prince.

“I love the fact that there was this ‘Thomas Crowne Affair,’ ‘Bond’-y sexy scene that they wrote about two people who are pretending to be two different people who each know the secrets of the other person,” Affleck said, as the magazine features a still of the two characters in fancy civilian attire an an elegant affair.