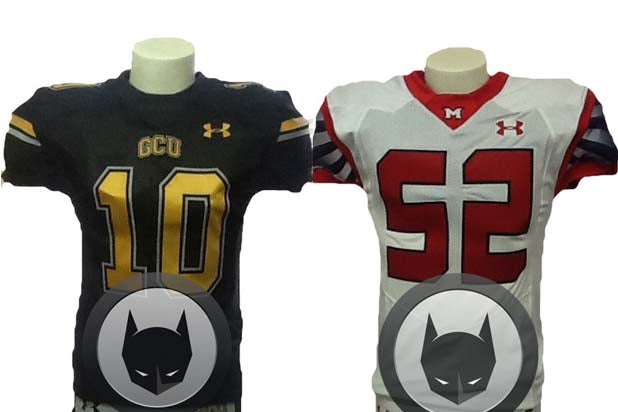 Just before fictional college football teams Gotham City University and Metropolis State University square off in front of the cameras for Warner Bros. upcoming Batman vs. Superman movie, the team’s jerseys have been unveiled.

Batman News has posted the first look at the apparel (and technically, the first look from anything in the movie, beyond Ben Affleck‘s face) the two teams will wear during a shoot scheduled for Saturday at East Los Angeles College’s 10,000-seat Weingart Stadium.

Zack Snyder, who directed summer blockbuster “Man of Steel,” is directing the scene which will be short and sweet.

As TheWrap previously reported, the footage is described as B-roll, and should only take 20 minutes to shoot during halftime at the ELAC Huskys’ game against Victor Valley College.

It’s not clear whether Affleck — who is playing Bruce Wayne/Batman — or co-star Henry Cavill will appear in the three takes of three plays and crowd reactions.

Interested in being on of the thousands of faces immortalized in what is sure to be one of the biggest superhero movies ever? The game starts at 6:30 p.m. and tickets can be purchased at the gate for only $5.