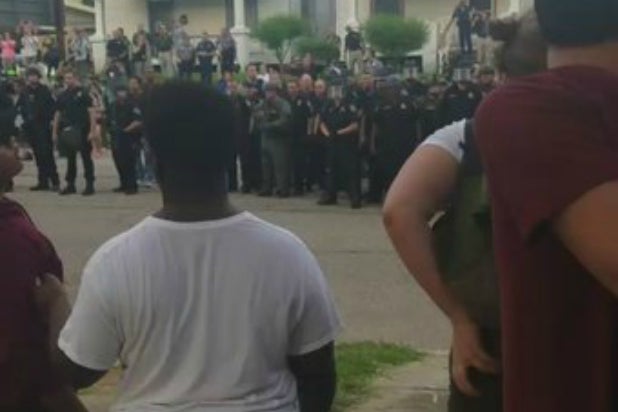 Scene of a previous police protest in Baton Rouge

A video retweeted more than 11,000 times Sunday shows peaceful protesters in Baton Rouge, Louisiana, reacting in horror as a phalanx of police officers try to break up their demonstration and begin arresting those taking part.

The video was captured by 22-year-old Elizabeth Thomas of New Orleans, who tweeted, “BATON ROUGE HAS TURNED INTO SYRIA.” It became a social media phenomenon Sunday as she sought and received widespread media attention for police treatment of the protesters.

Thomas told TheWrap she recorded the footage while standing on the lawn of a woman who said the demonstrators, many of them students, were free to use her yard.

“This is private property,” at least one protester is heard repeatedly chanting at officers, moments before officers are seen taking down a man on a sidewalk.

The standoff came on a weekend when Baton Rouge police arrested more than 100 people protesting the police shooting last week of Alton Sterling, one of two black men killed by police in two days nationwide.

At a solidarity demonstration in Dallas on Thursday, five police were killed by an armed gunman, adding to tension nationwide between officers responsible for enforcing the laws and demonstrators who want better policing.

Thomas sought out and received immediate and widespread media attention for the video. She told TheWrap:

The protest was in downtown Baton Rouge. It began at 4 and was led by high-school students. Then, when we tried to continue down government st the police stopped us. Then, they bring more officers that where heavily armored, which you can see in my initial video. That’s when they began threatening us with tear gas and arrests. The woman across the street said we were allowed to come onto her yard. Then all of the sudden the police attack us for NO REASON, which is what you see in my second video.

That video is below: