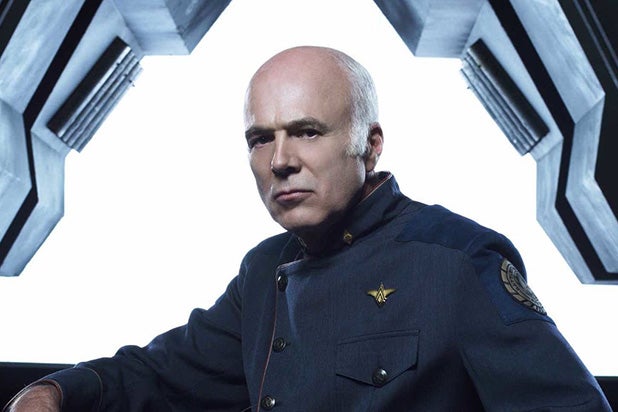 “Battlestar Galactica” actor Michael Hogan has been hospitalized since earlier this year after suffering a “massive brain bleed” from a fall, according to a GoFundMe page set up over the weekend.

“Michael was in Vancouver participating in a Battlestar Galactica convention, and at dinner following his day’s work, he fell and hit his head. Hard,” Hogan’s wife Susan said in a statement shared on the page. “He went to bed that night not realizing that the impact had caused a massive brain bleed. He was unable to be woken the next morning and was taken to Vancouver General Hospital and emergency surgery performed. It took 57 staples to close the part of his scull [sic] they had to remove in order to reach the damage.”

The actor suffered “complete paralysis on his left side, memory loss, cogntivie [sic] impairment and an inability to swallow” in the days following the February accident.

A number of Hogan’s former castmates voiced support for the actor and the fundraiser on social media on Monday.

“Our amazing XO has been fighting for months now,” wrote Tricia Helfer, who starred as Number Six on the Sci-Fi series. “Michael Hogan is one of the dearest, funniest, most talented men I know, and is going through an incredibly challenging time.”

“Whatever you can give, nothing is too small,” Mary McDonnell added. “And send all your love towards Michael’s valiant struggle.”

Producer Jane Espensen also shared the GoFundMe on Twitter, writing that Hogan “is a wonderful, kind soul who could use our help.”

“The real goal is to have Michael back – that sweet, funny, teasing, impish spirited bright light and brilliant actor and friend,” the fundraiser’s organizer, a family friend, wrote on the GoFundMe page. “And if at all possible, one day back in his home on Bowen Island with his dog Harley, his family, and treasured parts of the life he knew. But practically speaking, the goal is to give Susan a way forward without the crushing financial weight of the ever changing costs for his care.”