“Batwoman” Season 2 finale Sunday set up a lot of stuff for Season 3 — including a new hero. Luke Fox has fulfilled his comic book destiny of becoming Batwing. And for actor Camrus Johnson, that amazing suit has been a long time coming.

In fact, Batwing has been something to look forward to since he signed onto “Batwoman.” It was one of the first things he asked showrunner Caroline Dries about, and she was just as eager as he was. Originally, audiences were supposed to get a small tease of Batwing’s suit in the Season 1 finale, but then COVID happened, cutting the season short by two episodes, and the show found itself switching lead actresses, which changed up the story plans. Still, the goal was always to get Batwing on screen, and Johnson is ecstatic to finally suit up.

“It’s the craziest feeling because I feel like we all put on superhero costumes at some point. Every Halloween, all we want to do is be a hero,” Johnson told TheWrap. “But when you’re actually putting on an actually made superhero suit by professional superhero suit makers, and you’re seeing the details and seeing how heavy it is and how tight it is, it is – it is unreal.”

Indeed, the Batwing suit is more than just a Halloween costume. It’s as real as it gets, save for actually being able to fly.

“The coolest thing about it is that I feel like a superhero when I wear it. Like, I straight up feel stronger,” Johnson says happily. “It’s the weirdest thing. Whenever I’m wearing it, I want to throw stuff. I want to flip tables and stuff. I feel like I have all these muscles! Give me something to do!”

Of course, Batwing’s suit is more than just a suit tailored to “Batwoman,” their purposes and Johnson’s body. It’s the first live-action Batwing suit ever. And that means there was a learning curve to it — and a slight lack of comfortability.

“It wasn’t [comfortable] at first,” Johnson admits. “At first it was so tight. And everyone was like, ‘Oh my gosh, it looks amazing.’ And I was, ‘Actually, it looks perfect. But I cannot breathe.'”

The suit was designed by Maya Mani with assistance from Diana Patterson and illustrator Andy Poon, and created by Ocean Drive Leather; the helmet was sculpted by James Fairley at Amazing Ape. Johnson laughs about the comfort factor (or lack of it), noting that the costuming team fixed everything that needed to be fixed, as the issues came up. That said, there’s one thing that might be a bit harder to fix. 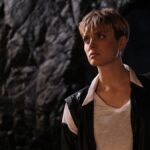 Granted, it’s a small price to pay when you’re a literal superhero. And for Johnson, it’s “totally worth it.” He’d wear the suit every day if he had to (though he hopes he doesn’t). And there’s one place he really wants to wear it.

“What I really want to do — I’m sure fans would expect it — I really want to wear it to Comic-Con,” Johnson says. “That’s like the coolest thing of having a super suit with a full helmet. You can literally walk around Comic-Con and — the thing about it too is, when I’m at Comic-Con, there will be people that have super suits that look almost identical. Cosplayers are geniuses. So I would love to meet other Batwings, and then be like, ‘It’s me!'”

Of course, Luke may not have arrived at this point without the help of an Arrowverse favorite: John Diggle (David Ramsey). After Luke’s near-death experience at the hands of Russell Taveroff led him to get a little reckless with his life, the younger Fox needed some guidance. And having Diggle be the one to really light the spark in Luke to use his anger to fight for good was something that meant everything to Johnson.

“As a character, he is like the first Black man of the Arrowverse. He’s the guy. He is the Black grandfather of the Arrowverse,” Johnson says. “So the fact that he was the one to talk to Luke, it just goes so deep.”