WARNING: Spoilers ahead for the season 3 premiere of “Batwoman” on The CW.

“Batwoman” has returned for season 3, and Alice is officially part of the Bat Team — well, sort of. In reality, she used her devious nature to rat out Ryan and the fact that Batman’s trophies are misplaced all over Gotham to Renee Montoya (Victoria Cartagena), who is now forcing the women to work together to clean things up. And series star Rachel Skarsten is more than pleased to explore Ryan and Alice’s dynamic a bit further.

Obviously, Ryan herself is none too thrilled about it. After Alice’s reveal in the season 2 finale that Ryan’s birth mother was still alive, and her insistent reminders of it in Wednesday night’s premiere, Ryan would like to put as much distance between herself and Alice as possible. But that’s nothing new for those two.

Thanks to their newly established history though, Skarsten notes that things are definitely going to be a bit more personal between them this season.

“I think [their relationship] looks a lot like it did last season,” Skarsten tells TheWrap. “I mean, Batwoman begrudgingly works with Alice but has not forgiven her nor does she like her. Which is funny because in real life we get on so well and it’s my favorite thing to make Javicia [Leslie] laugh, and she always has to be like, so mad at me [on-screen]. But yeah, I really like their dynamic this season because I felt like it’s been earned now. And all the moments, whether they be of conflict or you know, little sparkles of or tidbits of respect or admiration on either side, compassion, whatever it is. We sort of earned them last season and this season.”

Things are definitely going be more personal between Mary (Nicole Kang) and Alice as well. As the only remaining Kane family members in Gotham, they have an odd bond, but one that is complicated, to say the least. But Skarsten is excited to really dig into their semi-sisterhood.

“Nic and I talked about it a lot in seasons past because, especially in season one, this relationship between kind of Kate and Alice was such a big deal and then also the disappointments of the relationship between Mary and Kate. But I killed [Mary’s] mom,” Skarsten said. “And it’s funny because then when Ryan comes along, I killed her mom as well. But like, only my gang killed her. But I literally murdered — myself — Mary’s mom and yet we never addressed it. It’s just like, I killed her and then we never talked about it. No one ever brings it up and we often were like ‘oh, but we wish that we had addressed that more.”

Indeed, it’s one of the more overlooked aspects of their relationship. Only Mary herself brought it up in season two, reminding the Bat Team that she has no reason to like, let alone trust Alice, even in the most dire of circumstances.

“This season was really interesting for me because when I signed on to the show it was very much based in the idea of family and so it was just very nice to kind of come back to that idea of family and have that conflict and the history and all of those things,” Skarsten added. “So yeah, we actually get to work together a lot this season.” 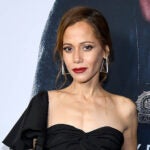 Of course, Alice isn’t the only baddie the Bat Team needs to keep an eye on this season. Season three’s premiere saw the terror of a Mad Hatter copycat — one that re-created Alice’s tea party that killed Mary’s mom, this time targeting Mary herself — who just so happened to be an Alice superfan. And yes, Skarsten thoroughly enjoyed that part.

“Oh, I loved the idea of Alice having a fanboy and actually I wish he’d stuck around for longer. I feel like she could have had so much fun with him,” she said. “And he was so, so brilliant.”

Obviously, fans know that Poison Ivy will show up at some point as well, played in the Arrowverse by “Agent Carter” star Bridget Regan. But Skarsten promises even more will pop up.

“It’s pretty cool, this season we have a lot of, to be honest some villains I’m very surprised DC even let us use,” Skarsten teases.