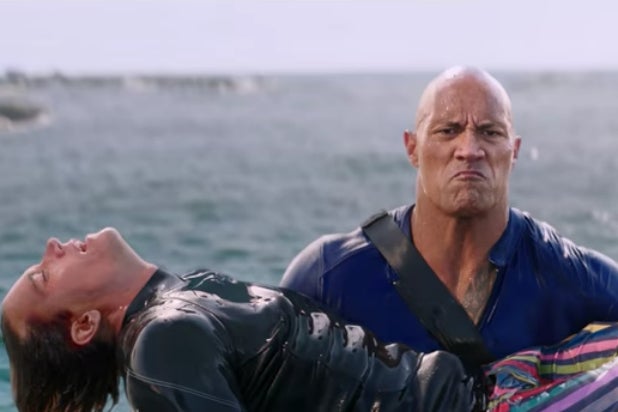 Not even the presence of frontman Dwayne Johnson could save “Baywatch” from getting panned by critics.

Seth Gordon’s R-Rated comedy, which is based on the hit ’90s TV series of the same name and stars The Rock as David Hasselhoff’s Mitch Buchannon, has an 11 percent rating on Rotten Tomatoes after early reviews came in on Tuesday. Reviewers singled out the film’s weak humor as a particular point of criticism while also noting that the movie seems to completely ignore what made “Baywatch” a hit.

“Six people collaborated on a screenplay that offers less than one laugh per writer, and the tone shifts are jarring,” wrote Duralde. “One minute Buchannon is forcing Brody to check a corpse’s very intimate areas for evidence of heroin injection — a slapstick set-up from which Gordon mines no comedy — and then the next we’re supposed to care about Brody growing up or about the drug subplot.”

Check out more reviews in the links below:

Stephen Whitty, Newark Star-Ledger
“Given a chance Efron can be very funny, but half-a-chance is all this film seems able to manage. Director Seth Gordon – who created some laughs in ‘Horrible Bosses,’ far fewer in ‘Identity Thief’ – doesn’t seem to know how to build a joke, and is afraid of taking on cliches. A promising idea – the central idiocy of a lifeguard who thinks he’s a cop – is never developed, and jabs at the old show are limited to a few slo-motion gags.”

Chris Nashawaty, Entertainment Weekly
“Back in 1995, ‘The Brady Bunch Movie’ showed that there was a clever, postmodern way to turn our mothballed childhood memories into irreverent satire. But with the exception of ’21 Jump Street’, Hollywood seems to be beyond the point of putting any effort into these things. Aside from some mild laughs that come from the alpha-dog friction between Johnson and Efron, Damian Shannon and Mark Swift’s script is a lazy barrage of sad-trombone product-placement gags and red-band boobs-and-boners jokes. Perhaps even more depressing is the realization that this current retread plague won’t be ending anytime soon.”

Rodrigo Perez, The Playlist
“‘Baywatch’ is surprisingly sloppy, even for a silly action comedy of this mild caliber. Much of the editing feels shoddily cut together and the CGI veers from noticeably cheap (characters on a boat with clear green screen behind them) to laughably bad (a boat on fire and the cast tearing through it to save lives is hysterically awful). Cinematically, the film is often visually incoherent in its action. But most of the movie’s well-considered camera blocking centers around finding ways to perfectly frame Kelly Rohrbach’s enormous cleavage and the gratuitous slow-motion shots highlighting breasts that seem to defy gravity.”

Gav Murphy, IGN
“In previous comedies, such as the ‘Neighbors’ movies, we’ve seen Efron play his beautifully sculpted type with slightly more nuance, whereas here he acts exactly like you’d expect an irredeemable buff bro stereotype would: he’s egotistical, brash, and ends up just being annoying. There’s also a crazy change in his character halfway through the movie when he becomes super-dumb out of nowhere and fails to understand basic human concepts.”