“US actress Mary Tyler Moore dies aged 80” was the headline on the obituary embedded in the now-deleted tweet. The tweet itself said her death was confirmed by her publicist.

“An earlier tweet about the death of Mary Tyler Moore in 2017 was sent from @BBCBreaking due to a technical error. This has subsequently been removed,” said a follow-up from the BBC World account.

Also Read: Mary Tyler Moore Remembered: She Made It, After All

The late actress trended on Twitter as a result of the tweet. Users spent Thursday morning and afternoon reminiscing about “The Mary Tyler Moore Show,” suggesting followers listen to its theme song for a pick-me-up, while others posted tributes and memorials.

Born in Brooklyn in 1936, Moore made appearances on series including “The Tab Hunter Show” and “77 Sunset Strip” before landing the role of Laura Petrie, the wife of Rob Petrie, on “The Dick Van Dyke Show.”

The role earned Moore an Emmy award in 1964, one of six Emmys she would win throughout her career.

Following “The Dick Van Dyke Show,” Moore stepped into the title role of “The Mary Tyler Moore Show,” which premiered in 1970 and starred Moore as Mary Richards, a single woman working as a news producer in Minneapolis.

Check out a screengrab of the now-deleted tweet below: 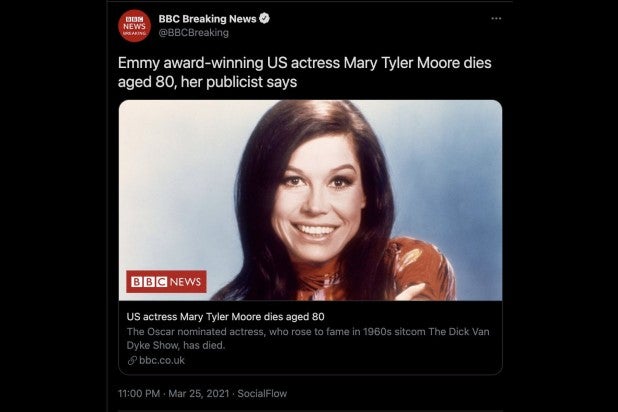