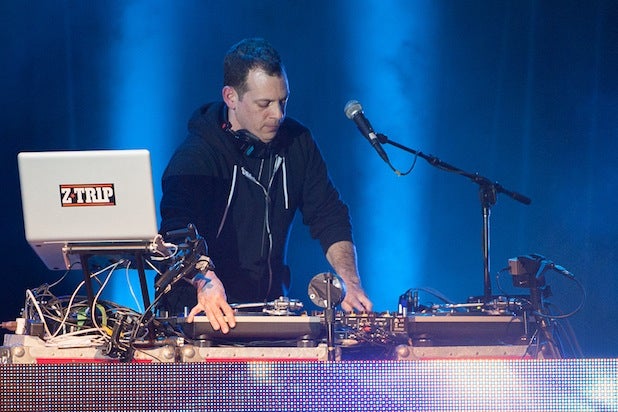 A federal judge on Monday dumped out Monster Energy Company’s third party counter-claim in its ongoing legal battle with the Beastie Boys, who sued the beverage-maker last summer for copyright infringement.

The Beasties sued first — serving Monster in August 2012 for using several songs in a video promoting a snowboarding event that May, just days after the death of Adam “MCA” Yauch (right) at age 47. Performing at the Lake Louise, Alberta event was Beasties scratch-era contemporary DJ Z-Trip (real name Zach Sciacca, above), who paid homage to Yauch with a long medley mix.

DJ Z-Trip had permission from the Beasties to use the songs — including “Pass the Mic,” “So Whatcha Want” and “Looking Down the Barrel of a Gun” — but Monster did not.

In spite of this, the company later made the remix available for free download, which spurred the original (and still pending) lawsuit — notable because one of Yauch’s final wishes, expressed in his will, that his music never be used for commercials or promotion.

Monster later sued DJ Z-Trip for breach of contract and fraud, blaming him for the mix-up and claiming he told a Monster employee it was OK to use the remix without restriction.

But U.S District Court Judge Paul Engelmayer signed an order Monday dismissing that claim and granting summary judgment to Z-Trip for various reasons we won’t get into here, because we’ve been fighting all day and now it’s time to party.

Pamela Chelin, who drinks Brass Monkey instead of Monster, contributed to this story.