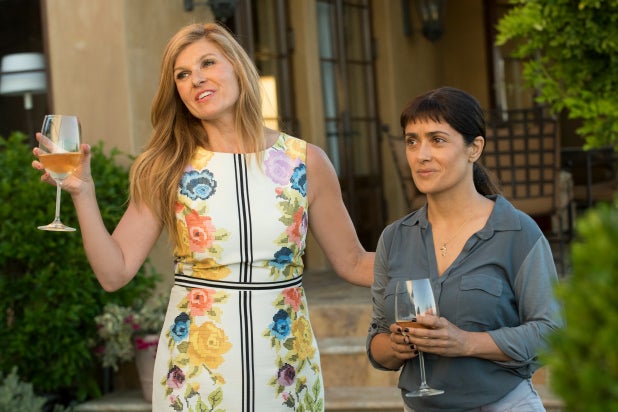 If zeitgeist appeal were everything, “Beatriz at Dinner” would be an instant classic: this satire pits a hard-working immigrant against a table full of irritating rich people and the mega-wealthy real estate mogul to whom they’re all toadying. Somehow, the blistering comedy you would expect never quite manifests, and instead we get a lot of on-the-nose sermonizing and weak-tea social commentary.

The film’s failure to launch is all the more disappointing given the talent on both sides of the camera: screenwriter Mike White and director Miguel Arteta established themselves as masters of inappropriate dialogue and awkward pauses in 2000’s “Chuck and Buck,” a classic of squirmy, hilarious discomfort. Between those two and a sterling ensemble led by Salma Hayek, this “Dinner” should have been sharper and much funnier.

Hayek, to her credit, makes the most of this opportunity to play a decidedly unglamorous character, and she excels even when the film doesn’t. There could be YouTube supercuts of actors embarrassing themselves by awkwardly handling vacuum cleaners or lawnmowers on film — you can tell when a movie star hasn’t washed their own dishes or entered a grocery store in decades — but there’s never a false moment in Hayek’s untucked proletarianism.

Beatriz is a masseuse and spiritual healer (she’s got Buddha on the dashboard and the Blessed Virgin hanging from her rearview mirror) who works at an alternative clinic for cancer patients. She also takes private clients, like Cathy (Connie Britton), who brings Beatriz all the way down to her lavish beachside estate on the day that Cathy and her husband Grant (David Warshofsky, “Now You See Me”) are throwing a dinner party for some important guests.

Cathy is the sort of rich person who likes to think of employees like Beatriz as “one of the family,” particularly since Beatriz’s ministrations greatly helped Cathy’s college-age daughter. Naturally, when Beatriz’s car breaks down, Cathy immediately invites her to stay for dinner. Lawyer Alex (Jay Duplass) and his corporate wife Shannon (Chloë Sevigny) are merely awkward and condescending around Beatriz, but then the guest of honor turns out to be boorish, Trumpian land shark Doug Strutt (John Lithgow) and his third wife, Jeana (Amy Landecker) — and that’s when “Dinner” should be getting heated up.

After all, Beatriz’s small town in Mexico was destroyed by a real estate developer (who may or may not have been Strutt himself), and while the laid-back Beatriz tries to keep her mouth shut, the piggish classism on display pushes her to speak out time and again, as Cathy attempts to keep the peace.

There’s a great set-up here, although perhaps the material would be better suited for the stage, since one of the film’s flaws is that it never plays up the claustrophobia among these characters being forced to interact with each other. That set-up never blossoms into the pungent satire it wants to be, however, because the black hats and white hats have been so obviously delineated that any social commentary becomes utterly blunted.

And since neither the cinematography (by Wyatt Garfield, “Ping Pong Summer”) nor the editing (by Jay Deuby, “The Heat”) turn the screws on these characters or on the narrative, we never feel that frog-in-a-boiling-pot tension that a movie like this should build. Once everyone’s in place, there’s never the feeling that any of this is going anywhere interesting. (And while I won’t spoil the ending, it’s a particularly dissatisfying climax in terms of both storytelling and of the film’s messaging.)

The cast is blameless: besides Hayek’s intuitive work, Sevigny finds subtle ways to dig at her obliviously privileged character, and Landecker communicates the compromises and rationalizations of someone who has married for prestige. (Casting both Landecker and Duplass seems like an odd choice, however, since they very prominently play siblings on “Transparent.”) As Cathy, Britton comes closest to finding the film’s desired ill-at-ease tone, as the character’s desire to be woke conflicts with the requirements of her social standing.

The time is right for what “Beatriz at Dinner” has to say, but it says it in a way that’s so ungainly and uninvolving that there’s no point in listening.