A “Beavis and Butt-Head” feature film reboot will make its way to Paramount+ this year. And Mike Judge, the creator of the classic 1990s animated MTV series, teased on Tuesday night that it will feature the two lead characters in an advanced age bracket.

For the project, Judge said in a tweet that plans call for a “brand new movie and more” on the streamer but that Beavis and Butt-Head “need some time to get back in shape.”

The tweet included mock-ups of older, middle-aged versions of Beavis and Butt-Head.

The untitled “Beavis and Butt-Head” movie on Paramount+ will serve as the kick-off for a forthcoming series on Comedy Central, which ordered the Judge-led reboot for two seasons in July 2020.

The original “Beavis and Butt-Head” ran on MTV from 1993-1997 and is considered among the network’s most popular series during its earlier, pre-reality TV days, both lauded for its satirical take on social issues and panned for its use of animated violence.

It was revived for a one-season return in 2011. The first feature film, “Beavis and Butt-Head Do America,” was released in 1996 by Paramount. 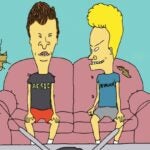