All too often, lately, we’re face to face with the latest new low. We’re at a new low, economically. Same with the relationship between two religiously polarized halves of the world. Ditto our relationships to one another politically in this country. Same with our deteriorating environment. We even enjoy watching new globally disastrous lows in our movies, from “Independence Day” to “2012.”

But even as we weather these lows, hardly even noticing how resigned we’ve become to them, there’s a sort of philosophical consolation prize to be appreciated. These extreme states help remind us who we are. 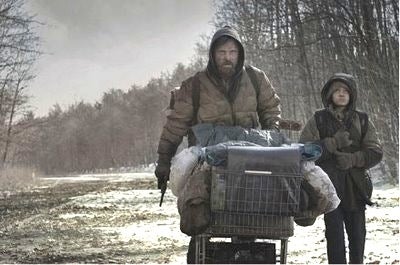 Nothing expresses this more eloquently than “The Road,” a book that emerged from the darkest depths of Cormac McCarthy’s midnight of the soul. And now it’s a movie, starring Viggo Mortensen and Kodi Smit-McPhee, a sensational kid who would have anyone reaching for adoption papers.

As the movie shows, McCarthy’s vision is the ultimate bummer scenario. The world’s all but destroyed from a nonspecific sequence of events. It’s abstract, but it’s there. A sense of hell, destruction, the end. There’s no food to be found. No animals. Homes charred and empty. Buildings destroyed. People have taken to driving around in hunting parties to eat their own species. Some keep their victims in a basement, to feed on them later.

The horror isn’t just external. It’s internal, a feeling everyone shares. A creeping apocalypse of the spirit. It’s the knowledge that everyone is out for survival but also that humans have run their course.

This fight to stay alive will not save the race. The cockroaches will soon get free run of the planet. It’s a world of despair. And we watch with unflagging horror and dread as an unnamed father (Mortensen) and his young boy (Smit-McPhee) negotiate their way through this existential wasteland.

The father has two bullets in the chamber of his gun. If things get too bad, if they find themselves surrounded by cannibals for instance, he intends to use them for himself and his son.

But the point here isn’t to rehash the movie. It’s to suggest that seeing it reminds us of some touching and powerful matters. This isn’t just about two people trying to survive, it’s also about trying to figure what’s still wrong and what’s still right.

It’s only at this level of existence that we truly discover what we’re all about. When nothing matters except daily, hourly survival, what do we retain as our ultimate values? Who are we when we’re whittled down to our ultimate state?

What will we give up? What won’t we? What’s important? What’s the last rung of the humanity ladder before we are no longer recognizable?

These questions get their answer. It’s simple, even hokey. But it’s also deeply satisfying. Are you ready for this? It’s love. No, really. And what makes this seem like a thunderous new pronouncement from an ancient stone tablet, is the way that the father protects his son, and the way the son holds on to his innocence and his love for people.

What we see, amid all this gloom and doom, is that the love between this father and his son proves that survival really is worth the trouble. Humans do deserve to live, at least if they carry on like these two.

“We will survive this. We’re not going to quit,” says the father with almost allegorical determination. And his pure determination, despite his fatigue, despair and trembling voice, is profoundly touching. He’s doing this for all of us, we feel. And suddenly, a new low becomes a pretty touching high.

It might even help us when we face those other lows – the ones in real life. Not too shabby an achievement for a movie.