Paramount+ has released the trailer for its upcoming “Behind the Music” reboot, unveiling an even bigger lineup of musicians for the documentary series.

The new series comes more than two decades after VH1’s original “Behind the Music” premiered in 1997. Each episode included one-on-one interviews documenting a different musician’s rise to fame and the hardships they faced along the way. 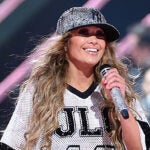 In the trailer for the 2021 reboot, which you can view above, “Behind the Music” offers even more personal reflections on the emotional twists and turns artists face in the music industry. The trailer teases insights on Fat Joe’s “painful betrayal,” while Lopez warns, “You are about to go on a ride you are not ready for.”

The first installment of the season will feature the episodes centered on Martin, LL Cool J, Lewis, Busta Rhymes, Duran Duran, New Kids on the Block, Michaels and Fat Joe. The second half of the series will include Lopez’s episode, as well as “other superstar names to be released at a later date,” according to Paramount+.

“Behind the Music” premieres on July 29 with two episodes featuring Martin and LL Cool J. The remaining episodes will be released every subsequent Thursday on Paramount+. Check out the new trailer above.