Aaron Sorkin’s “Being the Ricardos” canceled a shoot at the Chateau Marmont on Thursday, only hours before the production was to begin, due to a union picket line protest and a celebrity boycott movement, according to The Hollywood Reporter.

The iconic Chateau Marmont has faced allegations over the past year that it left its workers without affordable health care during the pandemic. The Sunset Boulevard landmark and longtime celebrity haunt also has been charged with allowing a climate of racial discrimination and sexual harassment.

A representative for the hotel declined to confirm the shutdown or comment on the report when reached by phone by TheWrap. A call to “Being the Ricardos” producer Todd Black’s production company Escape Artists was not immediately returned. 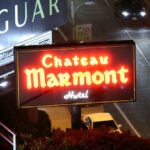 Black issued to THR on Thursday saying the producers shut down voluntarily upon learning of he union’s concerns.

“Writer/director Aaron Sorkin, the cast and crew of ‘Being the Ricardos’ stand in solidarity with The Chateau Marmont’s workforce,” Black said in his statement. “We are committed to supporting and building a safe and equitable environment where everyone has a right to work with dignity and free from fear. We are thankful to the organizers of the hospitality workers union of UNITE HERE Local 11 for sharing this information about the mistreatment of the workers. The production took immediate action to shut down the 1-day shoot as soon as this was brought to our attention.”

A Chateau Marmont spokesperson told THR: “Throughout its history, the Chateau Marmont has always been a safe haven for creative people to express themselves in accordance with the First Amendment. Today, Unite Here Local 11 broke that century-long compact by disrupting a union production who had the legal right to film on the hotel property.”

“Being the Ricardos” stars Nicole Kidman as Lucille Ball and Javier Bardem as Desi Arnaz. Sorkin is nominated for an Oscar for his screenplay for “The Trial of the Chicago 7,” which is also nominated for Best Picture.