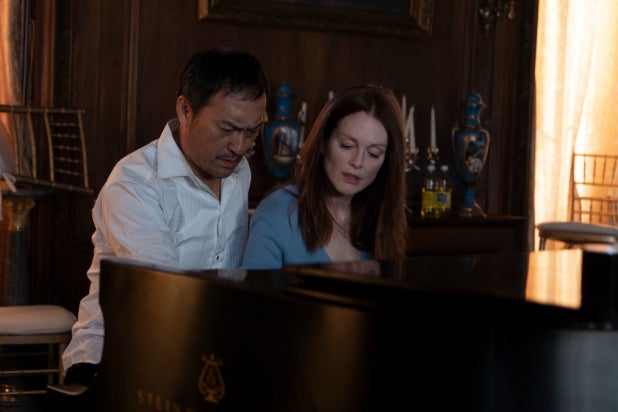 There are numerous ways to get a book to screen: by gut instinct, by pre-emptive calculation, by sheer luck. But the best ones may be those done the right way for the right reason, out of pure passion. Case in point: “Bel Canto,” which hits theaters today.

The novel, by Ann Patchett, became a best-seller not long after it was published in 2001. It tells the harrowing tale of an opera star and others of different nationalities being held hostage in a mansion in an unnamed South American country. Even (or perhaps especially) after 9/11, people continued to read this tale of terrorism. What is rather amazing is that it has taken over 16 years to be adapted to the screen.

Not that someone wasn’t trying throughout those years. When producer Caroline Baron read the novel, she instinctively believed she was the one to turn it into a movie. She had produced “Monsoon Wedding” and in 1999 had created FilmAid, an organization that uses film to educate and entertain displaced people around the world. “I saw in the book my favorite theme of the power of art to bring people together,” she says.

The road was not easy. Initially, Ann Patchett was not interested in having her book optioned. That alone is unusual, since it is rare that authors don’t see their books pick up in sales when a movie version is released. (“Sharp Objects” and “Crazy Rich Asians” come to mind recently.)

But when Baron heard that Patchett and opera star Renée Fleming would be speaking in New York, she showed up and introduced herself. “I told her about my work and how resonant I found the book,” recalls Baron. “She finally said, ‘Can we have breakfast tomorrow?'”

The deal was made, and as Baron explains, “16 years is really not all that long to get an independent film made these days.” The film went through at least six drafts, people became attached and then unattached, and there was constant stress. “I lost years of my life,” jokes Baron, who continued an opera theme with the award-winning Amazon series “Mozart in the Jungle.”

Then, two things happened. Paul Weitz signed on as director, and Julianne Moore agreed to star. (Fleming does her vocals.) Still, the film will likely have a difficult time breaking through the big studio releases.

There was a time when the whole country would get caught up in a film’s adaptation. When David Selznick bought the rights to Margaret Mitchell’s best-seller “Gone With The Wind,” the casting search for Scarlett O’Hara became a national event. Every actress of note vied for the role before Vivien Leigh, a relative unknown here, won out. And fans let Selznick know that if he even considered anyone but Clark Gable as Rhett Butler, he would not eat lunch in this town again.

Popular novel series like “The Hunger Games” and “Harry Potter,” obviously, garnered great interest when they were being adapted to film. (Would that Harry look like the one that millions of devoted young readers imagined?) Now, every major agency and studio has operatives whose job is to grab books before they are even published.

Most writers dream of Hollywood deals. David Grann is the latest go-to author, having sold his nonfiction books “The Lost City of Z” and “Killers of the Flower Moon.” (Robert Redford’s new film, “The Old Man And The Gun,” is based on Grann’s piece in the New Yorker.)

Though there are exceptions, including the initially reluctant Ann Patchett. (She is not commenting on the movie, and is busy writing and owning a book store in Nashville.)

Meanwhile, “Bel Canto” turned out to be somewhat prescient. Baron says the story “is more relevant than ever. One of our global challenges is mutual understanding and that is what this story is all about.”

That — and a producer’s tenacity.