This story about “Belfast” first appeared in a feature about black-and-white cinematography in the Below-the-Line issue of TheWrap’s awards magazine.

The power of black-and-white photography to evoke the past is a technique that Kenneth Branagh has understood since his second film as a director, 1991’s “Dead Again,” a modern thriller featuring long monochrome flashbacks set in the 1940s. “Ken has loved using black-and-white since then,” said cinematographer Haris Zambarloukos, who has collaborated with Branagh on eight features over the last 15 years. “And only two of our films together, “Cinderella” and “Jack Ryan,” have not included some splash of black-and-white somewhere in them. It’s a language we definitely know.”

But “Belfast,” the director’s acclaimed memory piece of his turbulent childhood in 1969 Northern Ireland, is their first collaboration in full B&W – although it does include color splashes, which we’ll explain below. Branagh finished the film’s screenplay when the COVID lockdown began (“Some people learned how to bake bread — Ken made ‘Belfast,'” Zambarloukos joked) and the first conversation about cinematography was one in which the two collaborators were finishing each other’s sentences.

“I said to him, ‘So you think we’ll be shooting this in…,’” Zambarloukos remembered, “and Ken said, ‘Yeah, black and white.’”

But the men’s personal philosophies about the strength of the format differed in subtle, fascinating ways. “For Ken, he really loves the transcendental quality of black and white. It can be the present and the past at the same time. It’s so minimalist, which makes it feel timeless. For me, what I love is that there’s less obvious visual description. The seasons are not so apparent, because you can’t tell the color of the sky or the leaves on the trees, and that lets you experience deeper what the characters are feeling. You cannot create emotion just simply with black-and-white, but it’s a more lucid way of capturing emotion.”

Thinking in those unobtrusive visual terms, Zambarloukos’ goal was to just be present with his camera – which, due to COVID concerns about crew size, he held and operated himself. “I didn’t want to pan or tilt during scenes,” he said. “I wanted to go to the widest frame as I could and allow for a simple tableau. I wanted the weather to play a part and I let natural light come in so you could feel things in the air. Where I would usually try to control everything, I would just let it be.”

At least one member of the cast was amused by Zambarloukos’ methods: Jude Hill, 11, who stars in a role based on Branagh’s boyhood. “Jude would watch us and be like, ‘Why are they on the floor again? Why are they hiding behind a table?’ Ken and I did spend a lot of time doing that, trying to find a place for the camera that says something.” 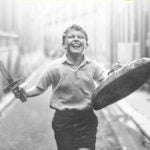 Also Read:
‘Belfast': Why Sound Designers Used the Roar and Whistle of a Train to Depict a Violent Mob

Closeups were also handled at a distance with a longer lens, especially for dramatic scenes such as one featuring Caitríona Balfe, pleading with her husband (Jamie Dornan) about their safety. “I didn’t want to get in between her and the family,” he said. “And I certainly cried a couple of times. After that scene with Caitríona, I looked at Ken and we just knew that was magic.”

Magic also occurs in “Belfast” in a cinema, where the family watches a car flying in midair in the 1968 musical fantasy “Chitty Chitty Bang Bang.” Though everything else remains black-and-white, “Chitty Chitty” appears in full color, as does the Raquel Welch fantasy sci-fi “One Million Years B.C.” in the film. And at live stage production of “A Christmas Carol” in the film, we also see color in the reflection of Granny’s (Judi Dench) eyeglasses.

“We made a matte window around the glasses and basically we just color-corrected that part of the image,” Zambarloukos said. “And Ken told us that his memories of that time were black-and-white, but his imagination, symbolized by the movies in this example, was in color. What an incredible way to express that feeling.”

For Zambarloukos, his experience of seeing the finished film for the first time also proved memorable. It was at the end February last year, right after the final visual corrections had been completed, and the cinematographer was back in his native Cyprus, visiting his extended family for the first time in a year.

“I had missed my dad’s 90th birthday but I managed to be back home at Christmas and I stayed there for awhile,” he said. “Ken called me and he asked if I could convince a cinema in Cyprus to let me see the film. I asked around and then Ken sent the film over to a theater that agreed. I took my wife, my mother and my father. It was amazing. My dad’s 91 now and my mother’s 80 and I don’t know how many times I’ll get to go to the cinema again with them. This was so special.”