There’s a very good reason why we called the film "Believe."

It would have been so easy simply to call it "The Eddie Izzard Story." It’s the story of Eddie Izzard: It does just what it says on the tin.

When I started filming, Eddie was suffering a huge personal and career crisis. He’d been called a fraud, a failure. 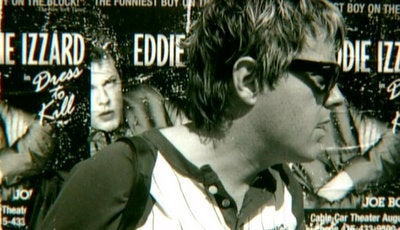 I followed him until the moment, four years later, when he finally began to face up to himself, his past and who he really was.

Eddie is a great performer, but offstage he doesn’t show his real emotions. He’s too stiff-upper-lip for that.

Unfortunately, when you’re making a documentary, honesty is vital. There were times when I thought I would never get what i needed from him.

I had come from a classical, British theater background: Give me a script and I’ll give you a show, no problem. But suddenly I was cutting my movie teeth, with just me, a sound guy and a cameraman (sometimes not even that, just me doing wobbly hand-held camera).

It was a vertical learning curve. There were so many problems, so many setbacks, so many wrong turns: One whole year’s worth of unusable footage, anyone?

But documentaries being documentaries, you don’t always get what you think you want, or what you started out looking for. What you do get, quite unexpectedly, is exactly what you need.

The synchronicity on this production was incredible. Just as I was wondering how the hell to pull together a whole childhood with nothing but a few photos, a call came from Sweden. Someone had some Super-8 footage of Eddie as a boy, and offered it to us. It was like someone magically knew, 40 years ago, that this was exactly what was needed need. It turned out they hadn’t even known I was making a film.

Then another call came from out of the blue, this time from a fellow nurse in Scotland; then more help, from all across the globe — decades-old footage from long-forgotten gigs in long-gone bars. This is when i started to believe.

We live in a world of instant returns. We’ve been led to believe that if we don’t achieve overnight success we should stop trying.

I hope this film shows that if you stick to what you know is right, if you hang in there, work your ass off and refuse to take the easy route, eventually, you’ll get there.

What helped Eddie to come back to comedy, what helped me to make this film, is the same bloody-minded determination not to be put off just because the going gets crazy.

Besides, a touch of insanity can be inspirational — and Eddie’s story is a beacon of hope for anybody who’s losing faith in themselves; who’s afraid that the boat has sailed and they’re not on it.

People keep coming up to me and saying: “I was thinking about giving up, but now I’m not going to. I had no idea Eddie had it so tough, but he kept on going.” And I say: “You’d better believe it.”

BIO Sarah Townsend
Producer-director Sarah Townsend has made a name for herself across the genres of theater, film, stage shows and documentary filmmaking. Her talent for storytelling -– cultivated through an innate passion for music, mime, movement, and humor –- continues to develop with her diverse body of work. Townsend most recently released "Believe: The Eddie Izzard Story" and is in development on "White Horses," scripted by Diane Weipert.

Producer-director Sarah Townsend has made a name for herself across the genres of theater, film, stage shows and documentary filmmaking. Her talent for storytelling -– cultivated through an innate passion for music, mime, movement, and humor –- continues to develop with her diverse body of work. Townsend most recently released "Believe: The Eddie Izzard Story" and is in development on "White Horses," scripted by Diane Weipert.
x
Looks like you're enjoying reading