Bella Hadid had a dress sprayed onto her body during last night’s finale of the Coperni fashion show for Paris Fashion Week, stunning those in attendance. And now video fo the moment is making the rounds.

The 25-year-old model took the runway in only a pair of heels and underwear, holding her breasts in her hands for two men to spray paint white latex onto her body, so that she eventually got dressed in front of a live audience. Synth music accompanies the formation of the gossamer gown as the transfixing video below shows.

The final look, which took 15 minutes to create, consisted of a midlength gown with off the shoulder sleeves, in which Hadid walked off the runway. A woman cut a slit in the skirt of the dress and pulled the sleeves down off of Hadid’s shoulders.

The Cut also detailed how the dress exhibit came to be, all starting with a can of silly string and a man named Dr. Manel Torres.

According to People, Manel Torres, PhD, inventor of the spray-on fabric, and other specialists surrounded Hadid to make the vision come to life. The fashion show took place in the Salle des Textiles at the Musée des Arts et Métiers in Paris. 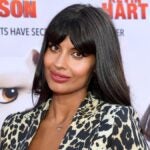 “We wanted to dedicate this moment to Dr. Torres, because we respect what he does so much,” Coperni’s Arnaud Vaillant told Vogue. “We felt that it was absolutely necessary that he led the performance – to us, that makes the experience even more magical.”

Vaillant and Meyer also told Vogue how the concept behind the viral video reaffirms their “celebration of women’s silhouettes from centuries past” while also “updating their aesthetic in a scientific way” as well.

The French brand has previously used DIY fashion in the form of hand-blown glass objects that accessorize celebrities like Doja Cat on red carpets, as mentioned in Glamour.

Hadid shared a slideshow of photos of the dress in formation (which you can view below) — evolving from gossamer threads almost like cobwebs to a solid flowy white material — as well as its duration throughout the night. 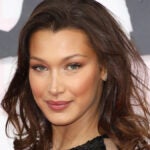