In Zack Snyder‘s “Batman v. Superman: Dawn of Justice,” Wayne Manor isn’t stately anymore. In fact, the grand old house is now a burned-out, moldering ruin, and millionaire Bruce Wayne (played by Ben Affleck) has abandoned it for a shiny glass Modernist box next to a lake that hides the underwater entrance to the Batcave.

As we discover over the course of the film, it’s not just Bruce Wayne’s address that has changed: The master of the house is one fans of the Dark Knight’s previous film and TV incarnations may not recognize.

This is a more grizzled Batman, the one who turns up in Frank Miller‘s “The Dark Knight Returns”: He’s got five o’clock shadow, some gray at the temples, and a world-weariness that follows two decades of fruitlessly fighting Gotham City’s most unhinged villains. This is a Bruce Wayne who awakens from a nightmare — with a curvy lady in his bed, this being a Zack Snyder movie and all — who turns to a bottle of vintage Château Margaux for respite.

When Affleck’s casting was announced back in the summer of 2013, there was the requisite fanboy freakout that greets almost any decision of this nerd-magnitude. Google searches will take you to similar explosions over “pretty boy” Heath Ledger playing the Joker or “that Buffy guy” Joss Whedon directing “The Avengers,” although you could shoot a cannon on the floor of Comic-Con and not hit anyone who would still object to those assignments. 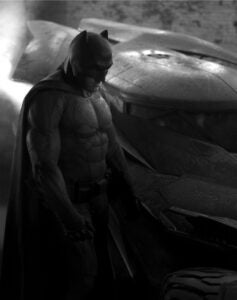 As it turns out, Affleck’s Batman/Bruce Wayne is one of the best casting choices in “Batman v Superman,” right up there with Gal Gadot as Wonder Woman and Jeremy Irons as the butler Alfred. Yes, Affleck botched his previous superhero assignment in “Daredevil,” but how many times did Ryan Reynolds get saddled with lousy comic-book adaptations before scoring with “Deadpool”?

Part of what makes the role such a good fit for Affleck is Snyder’s decision to eschew the character’s duality. As originally envisioned by Bob Kane and Bill Finger, Batman was a shadowy agent of vengeance who hid in plain sight thanks to his secret identity as “playboy” Bruce Wayne, the kind of rich fop who could be counted on to show up at society events with some glamorous arm candy and then yawn a lot.

Bruce was to Batman what Don Diego was to Zorro and Sir Percy was to the Scarlet Pimpernel, a foppish alter ego whom no one would suspect was actually the man in the mask. Snyder and executive producer Christopher Nolan are all about 24/7 testosterone, and so “Batman v Superman” gives us ActionBruce!

ActionBruce! drives through the streets of Metropolis under siege and runs toward a collapsing building. ActionBruce! attends underground fight clubs to get close to Russian mobsters. ActionBruce! does hardcore CrossFit-like routines to pump himself up for the titular clash with a seemingly invulnerable alien. Not that Affleck couldn’t have handled playing a wimpy Bruce Wayne, but he never has to, since this movie’s take on the character makes him nearly as much of a badass as the dude in the cowl.

There’s a lot wrong with “Batman v Superman: Dawn of Justice,” to be sure, but Affleck isn’t part of the movie’s problems. If anything, the film’s closing sequence, which establishes that Bruce Wayne will play the equivalent of both Nick Fury and Tony Stark in putting together the Justice League for upcoming DC Comics franchise entries, suggest he’s got both the gravitas and the grit for the job.