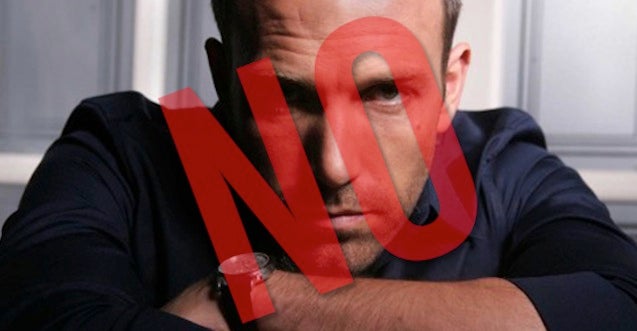 The surprise Bat-casting of Ben Affleck as the Dark Knight in the "Man of Steel" sequel is sparking a fury on the internet.

It isn't just on Twitter, where mentions of "batman" and "affleck" blew up as soon as the decision was announced late Thursday and a #BetterBatmanThanBenAffleck hashtag quickly spread. A Change.org petition protesting Affleck has already reached over 7,000 signatures.

And on Facebook, where Batman and Warner Bros.' pages have been flooded with negative comments, several anti-Affleck pages have sprung up, including a mass suicide "event" scheduled for July 2014 that we hope is just a joke.

True, it doesn't take much to ignite the internet these days, but Batman is a biggie — both because the role has finally been cast after months of rumors and because of who got it.

No one expected Ben Affleck.

Twitter analytics tracker Topsy showed how mentions of "batman" and "affleck" are now far exceeding even mentions of "obama":

The announcement also gave "affleck" a nice bump over "bale," which had previously enjoyed a big lead over "affleck" — especially when rumors swirled that Christian Bale, the previous Batman, had been offered $50 million to reprise the role for the next film.

Even "keaton" mentions went up, as people speculated over whether Affleck would make a better Batman than two-time Dark Knight Michael Keaton — or rallied for Keaton to be given a role a Lex Luthor in the upcoming film:

(It should be noted that there are plenty of times when "keaton" and especially "bale" were used in tweets that referred to other people or uses of the term. Topsy is not an exact science.)

On Facebook, most fans are rallying against the casting choice, though there are several who urge a "wait and see" approach, citing fan protests of Heath Ledger and Keaton's castings in previous Batman films that initially generated a largely negative fan response but turned out just fine.

And finally, over on Reddit, the Batman subreddit is full of Affleck-related activity. Though negativity dominated the response immediately following the announcement Thursday night, by Friday morning many were urging optimism about the casting.