Ben Shapiro found his match while talking to a class of grammar school kids about taxes, with one sharp youngster telling the conservative political commentator that what he was saying just wasn’t true.

Shapiro recently made an appearance at a Florida public library to talk with children about the U.S. government, but the lesson turned more than a little politically biased.

Armed with a stack of cards with a government term printed on each, he attempted to, as he put it, “explain these to very, very small children in a fashion that kids can understand.” Judging by the response of at least one young boy in the group, they understood the terms perfectly – but maybe it was Shapiro who didn’t.

“The government takes all your money and gives you very little in return,” Shapiro said at the beginning of the discussion

“That’s not true,” one boy sitting on the floor in the back responded.

“I mean, it’s kind of true,” he acquiesced. “It depends on the kind of government.” He added, “Taxes are theft.”

Shapiro tried to explain the purpose of taxes, like paying for police, but then added, “They’re not supposed to spend it on just random projects or silly things that they have in their head,” leaving these 8-year-olds to define the term “silly things” the same as he defines it.

He went on to talk about California, “where monsters roam the streets and garbage is strewn everywhere. It’s, it’s a horror escape.” He hit his verbal rewind button, saying he was only joking about the monsters, but continuing to bash the state, while talking up Florida and bashing President Biden to the elementary school children.

His rather young audience for such a politically motivated discussion, for the most part, soaked it in.

The boy who earlier spoke out, after Shapiro was done, said, “I’ve seen my mom look at him on Facebook. She said he was a very smart guy.” Asked by the producer if he agreed, the boy said, “Well, now that I’ve met him, maybe.”

You can watch Sharpiro’s time with the children in its entirety here. 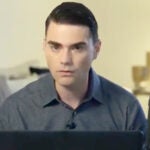