The “The Best Man” cast has come back to give audiences an update on the beloved group of friends in the film franchise’s new limited series “The Best Man: The Final Chapters.” And you can watch the trailer right now.

The eight-episode continuance picks up nearly 10 years after the sequel “The Best Man Holiday,” and per the logline finds our group of friends “as relationships evolve and past grievances resurface in the unpredictable stages of midlife crisis meets midlife renaissance.”

We get a lot of that in the trailer — new professional opportunities, difficult relationship challenges — and Lance absolutely failing to do a remotely credible performance in a fragrance commercial. But at least we can say, based on the trailer, that the gang appears to be in a better place with one another than the last time we saw them. 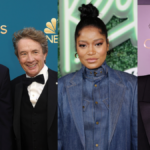 “Fans of the franchise have consistently asked me (and the stellar cast) when are we going to tell them what’s happened with this group of friends? And what better way to do that than to give them what they want (and more) in a limited series,” Lee said. “Given the moment that we are in, this is the perfect time to revisit Harper, Lance, Murch, Quentin, Jordan, Robyn, Candace and Shelby and go on the wild, emotional, hilarious ride with them, as they deal with their own journeys through parenting, activism, old love, new love and the complexities of being Black in 21st Century America.”

The series was co-developed by, writer, executive Producer and co-showrunner, Dayna Lynne North of Loud Sis Productions. Sean Daniel of Hivemind and Dominique Telson of Blackmaled Productions will also serve as executive producers.

The series will premiere with all eight episodes on Peacock on Dec. 22, 2022.