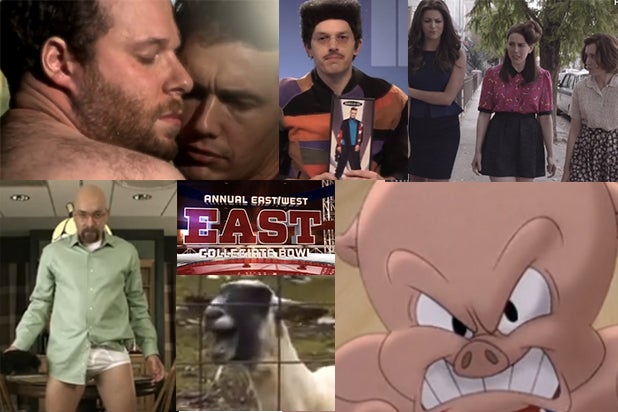 The year 2013, like all years, offered plenty of comedic fodder, perfect for parodying — and the spoofers did not disappoint over the course of the 365 days that they had to shoot the below videos.

From James Franco and Seth Rogen making out in a shot-for-shot remake of Kanye West and Kim Kardashian’s “Bound 2” to “Late Night With Jimmy Fallon” offering the definitive “Breaking Bad” parody, YouTube was a blur of impressions.

Here are 10 of the best from the year that was:

James Franco and Seth Rogen‘s “Bound 3”
Kanye West’s music video for “Bound 2” was ripe for the picking (on). It just so happened that Seth Rogen and James Franco had some downtime right after the racy video was released, while filming an actual movie called “The Interview.”

What happened next was a near-perfect shot-for-shot remake, the aptly titled “Bound 3,” which includes the two friends and recurring co-stars making out — hard — on a motorcycle. Franco played West, while Rogen was the topless Kim Kardashian.

Robin Thicke and Pharrell delivered one of the biggest songs of 2013, and Kimmel delivered the least-sexy video version of the catchy tune.

“SNL” Bobby Moynihan as Mayor Rob Ford
Even with all the competition from cable and the internet, no one spoofs politicians quite as well as “Saturday Night Live” does. And 2013 had no more spoof-able a politician than Toronto Mayor (and occasional social crack-smoker) Rob Ford.

Bobby Moynihan was the ideal crazy, sweaty impersonator, and his “Whoa! That’s alotta crack!” line was perfect. Plus the sketch comedy actor really went for it; Moynihan twisted his ankle performing the prat fall — now that’s dedication to a character.

“Late Night With Jimmy Fallon”: “Joking Bad”
“Joking Bad” is probably the most ambitious and elaborate parody on our list — but it delivered on the promises of its promotion.

“Joking Bad” is a fantastic comic re-imagining of the AMC powerhouse “Breaking Bad.” The casting is great, and the cameos by “Breaking Bad” stars Bryan Cranston, Bob Odenkirk and Aaron Paul really lend  credibility to the spoof. But the big pay-off cameo comes at the end — we won’t spoil it.

“Key & Peele,” “East/West Bowl 2”
Perhaps the most remarkable feat of parodying in 2013 was the ability of comedy duo Key & Peele to come up with roughly 30 different ways to humorously say a football player’s name and his college. Throw in the fact that they did the same skit just a year ago with different names, looks and schools, and all fans can do is bow down to the talent.

“East/West Bowl 2” shines light on one of the the more awkward football traditions, the headshot introduction. Don’t miss the floating head profile snapshots in the background.

This is the shortest clip on our parody list, but it packs as strong a payoff as the rest of the full-length videos do.

If Dunham’s “Girls” think they have problems, they should live a day in Blerta’s shoes — if she owns shoes, that is.

Vanilla Ice and Flavor Flav on the “ArScheerio Paul Show”
Comedian Paul Scheer and Max Greenfield from Fox’s “New Girl” recreated a classic 1991 “Arsenio Hall Show” interview with guest Vanilla Ice, nearly shot-for-shot. Greenfield was a perfectly slumping, smirking leathered-out Rob Van Winkle with full attitude, hair streak and rapper gear. Greenfield even wiped his brow with a towel at the appropriate moments, in between awkward attempts to convince Hall of his acceptance in the black community.

Even Flavor Flav (Eric Andre) stopped by, just like in the original.

Those who are not familiar with Anderson’s film work (“Moonrise Kingdom,” “The Royal Tennenbaums,” “Rushmore”) may not be able to appreciate the direction and editing of the below spoof, but it’s worth it just to hear Norton’s narration of his letter back to The Murderers.

“30 for 30”– “Space Jam”
This parody gives viewers an entirely new perspective on the classic Michael Jordan/Looney Tunes hoops flick, with real hoops analysts mostly talking about how badly the Aliens vs. Tunes game to save the Earth was officiated. And it’s true: Foghorn Leghorn was legitimately burned to death.

Thank goodness we had “His Airness” on our side, and the Aliens for some reason chose to invade Shawn Bradley.