BET will honor the one-year anniversary of George Floyd’s death with a series of three news specials reflecting on his life and the turbulent last year in American society. 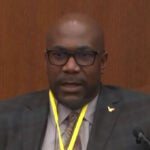 The three nights of programming stem from ViacomCBS and BET’s $25 million Content for Change initiative, which launched last June. The initiative “seeks to support the elimination of systemic racism and racial inequities in America through the creation, distribution, marketing and promotion of content that is specifically designed to positively impact perception, understanding and engagement.”

“In the year since we’ve lost George Floyd, we’ve all been tasked with examining difficult truths, while the Floyds and many other Black families have buried their loved ones. These tough times push our collective consciousness to challenge societal inequities and strive for safer futures,” BET President Scott Mills said in a statement. “A year later at BET, it is critical that we continuously join the effort honoring George Floyd’s life and building the world he deserved. Creating Content for Change is part of our contribution to the cooperative effort we all must make in the fight for accountability, justice and equity.”

“As our community demands accountability in the wake of the tragedies that occur entirely too often, BET will continue our frontline coverage that shines a light on those in positions to affect change. We will continue to use our platform in a way that makes it clear: that even as time passes, we will not be moved or discouraged. We will continue our charge forward in the fight for social justice,” Jeanine Liburd, BET’s chief social impact and communications officer, said.