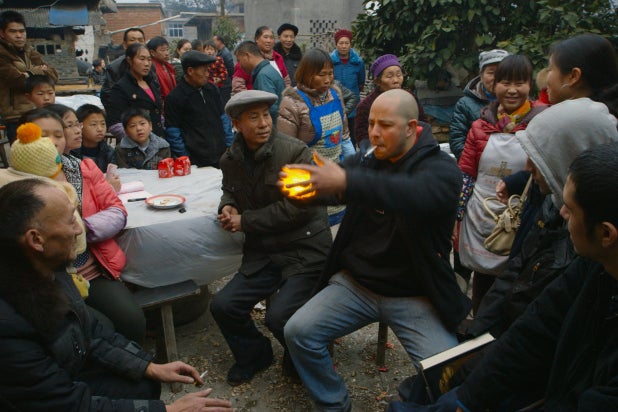 Vilifying China is one of Trump’s most hackneyed talking points. In his perennial hunt for an entity to attribute the economic hardships the United States is facing, the Asian superpower is always a prime candidate to take all the blame. Addressing such political mistrust, the feature documentary “Better Angels,” from two-time Oscar-winning director Malcolm Clarke (“Prisoner of Paradise”), argues that it’s only by setting our sights on civilians — referred to here as “accidental diplomats” — building cultural and economic bridges can vitriolic misconceptions about each other be demystified.

Experts and former dignitaries, speaking in classic talking-head interviews, explain that China’s ascent into global leadership is unstoppable, thus it’d be foolish for any country to not foster an alliance with them. Next, they establish that animosity between the American and Chinese governments is clearly hazardous to their interconnected futures, as it prevents productive cooperation. These statements are clear, but are reiterated over and over throughout the doc’s running time as examples come to light.

What ensues is a series of human-interest segments about Americans seeking opportunities in China, businessmen setting up shop in Middle America, and the dominance Chinese companies have in African nations like Ethiopia. All of these ventures are presented in inspirational fashion, focusing solely on the immediate benefits they provide. The 2006 episode of “Discovery Atlas” titled “China Revealed” remains still a much more complex examination than Clarke’s effort, even more than a decade later.

As a whole, “Better Angels” is riddled with good intentions and an aura of hopeful positivity, all of which are not balanced with more objective observations. The result is a saccharine, feel-good, let’s-be-friends bumper sticker of a movie that simplifies a complicated relationship. There’s no place in its didactic approach to veer into unflattering facts about either side, and that reads as a deliberately naïve refusal to look beyond pretty façades.

Clarke makes a point to include superimposed names of cities or countries in on both English and Chinese in an effort, it seems, to visually treat both languages, and in turn both cultures, as equals. It’s a small touch that serves its purpose to make one curious. Again, the filmmaker’s well-meaning disposition is not the issue, but the unyieldingly joyful tone of the work is.
Among the many individuals whose life experiences are shown to epitomize the “better angels” concept, one of the most enthralling is that of Memo Mata, a former US Marine from Los Fresnos, Texas, who moved to China searching for a higher-paying job. Mata not only became an English teacher and football coach, but also married a Chinese woman and put down roots there. Today, he describes himself as more Chinese than American and only visits the US on occasion. No numeric data of how many other Americans have found employment in China is provided.

Then there is Glad Cheng, a businessman from Beijing, who came to Muscatine, Iowa, encouraged by a little-known piece of history: Back in the 80s, a group of Chinese entrepreneurs visited the small town to learn about local farming techniques. One of those visitors was a young Xi Jinping, current president of China, who asked to stay with an everyday American family. Cheng bought the property, renamed it “Friendship House,” and gifted it to the city to be kept as a landmark of Chine-American amicable relations.

Both of these uplifting illustrations — alongside myriad others that include an abacus master teaching math around the world or an African American woman hired by a Chinese factory in her hometown — are curious cases that highlight exactly what the production’s message is without taking into account the reasoning and consequences behind any of these stories.

America is praised for cultivating independent thought among students, while China is commended for its voracious business shrewdness. Meanwhile, human-rights violations happening in both territories are obscenely ignored. China’s restrictions on online access, censorship, and its marginalized millions that don’t have access to any of the promising cosmopolitan prospects are not mentioned. American’s inability to access health care, higher education, equal pay, and basic protections is also left out.
The casting of “Transformers 4” gets a mention, though, because producers capitalized on China’s box-office power and set up an elaborate talent contest to select four Chinese actors for non-speaking roles in the 2014 installment of the Michael Bay franchise.

A glaring oversight is the complete absence of any Chinese-American voices. Children of Chinese immigrants born in the United States may certainly have a singular perception on this topic as people inherently granted a bicultural identity. Yet none of them appear here to challenge or corroborate Clarke’s take. Their parents, in many cases working-class Chinese immigrants, are also not represented. Was there fear they would share negative views about their homeland or maybe even their adoptive home?

For all its artificially stirring music (composed by Luc St. Pierre), “Better Angels” is a shallow analysis disconnected with the harshest realities of out time. It’s far from being malicious, but making a movie centered only on the shiny parts is too unnaturally artificial to make an impact.