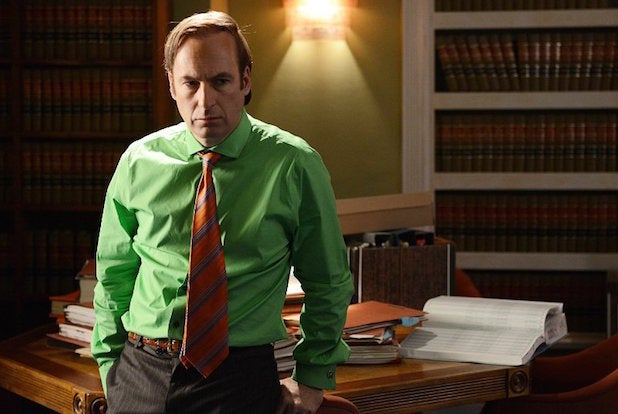 Within the first 20 minutes or so of AMC’s “Breaking Bad” prequel series “Better Call Saul,” it quickly becomes clear that Bob Odenkirk is a worthy successor to the role of unlikely leading man in a New Mexico-based series. Just as Bryan Cranston was a revelation as Walter White in the parent series — after years making us laugh on “Malcolm in the Middle” — Odenkirk shows a depth of character unexpected in smarmy lawyer Saul Goodman.

Of course, he’s not Saul Goodman yet. That fast-talking, shifty lawyer who works both sides of the law is lurking beneath the surface, but he’s a few years off yet.

Here he’s still Jimmy McGill, living his real life, such as it is. And it isn’t much.

Jimmy is a struggling lawyer, working as a public defender to make ends meet. His office is unbelievably depressing, and he gets absolutely no respect from anyone. But watching this guy get dumped on over and over again — while fun in “Breaking Bad” — probably isn’t going to sustain a whole series.

Viewers need a reason to get behind Jimmy, and they find it about halfway through the premiere episode, airing on a special night Sunday at 10 p.m. after “The Walking Dead” on AMC. That gives you an idea how important this show is to the network.

“Breaking Bad” was a huge series for AMC, and with “Mad Men” getting ready to end, the network needs “Saul” to work. It’s a tall order, considering “Breaking Bad” is one of the most highly-regarded television series of all time.

When it was announced that creator Vince Gilligan was going to spin Odenkirk’s Saul Goodman into a prequel series, critics and fans alike were incredibly skeptical. And they will remain so going into the premiere.

But go into the premiere they will, and in very large numbers. Gilligan’s job, with series co-creator Peter Gould, is to give them a reason to come back.

They do so by humanizing Jimmy through the introduction of his brother Chuck, played very effectively by Michael McKean. Yet again, a comedic actor coming through dramatically on a Vince Gilligan show.

Chuck McGill was at one time a very respected lawyer and name partner in a major law firm, Hamlin Hamlin & McGill. But about a year ago, all of that changed when he became afflicted with a serious mental condition. This affliction has affected his career and his relationship with Jimmy and his former colleagues.

The connection to Chuck’s old law firm is only grazed in the first two episodes, but two of its key members, Howard Hamlin (Patrick Fabian) and Kim Wexler (Rhea Seehorn) are regular castmembers, so Harmon Harmon & McGill looks to play a larger role as the season progresses.

The regular cast also features the return of one of the most popular “Breaking Bad” characters in Jonathan Banks’ Mike Ehrmantraut. When Walter White meets him, Mike is working as a fixer of sorts for Gus Fring (Giancarlo Esposito) and even Saul Goodman from time to time.

We’re a long way from that, though, as Jimmy and Mike are quickly pitted as mortal enemies for the most ridiculous reason possible … parking validation. Mike is a parking attendant at the courthouse where Jimmy works as a public defender. And Jimmy never has enough validation stickers to get out of the lot.

If it sounds silly, it is. And it’s supposed to be. Like the earlier seasons of “Breaking Bad,” “Better Call Saul” has a pretty prominent streak of dark humor running through it. Odenkirk was the source of a lot of the humor in “Bad,” and he certainly brings a lot of it here, as well.

Other humor comes organically from some of the ridiculous situations that arise. Jimmy’s attempt to run a scam on the county treasurer — who’s stolen more than a million dollars from the treasury — takes a hilariously twisted turn when the idiots he hires to help him wind up hitting the wrong target.

They do manage to bring in the first surprise appearance by a fan-favorite “Breaking Bad” character. On the first two episodes, this character is easily the source of the most humor. And through his appearance, we are introduced to Nacho Varga, played by regular castmember Michael Mando. And it is through Nacho and his own ambitions that it looks like this first season will develop.

Jimmy has made some sketchy choices in his past, but he really does want to play it straight and be successful as a lawyer for all the right reasons — like his brother managed to do. The problem is that Jimmy’s life is so desperate and miserable, it’s almost too tempting to fall back on his more illegal instincts.

Probably the biggest surprise about the premiere of “Better Call Saul” is just how comfortable and familiar it felt. This isn’t “Breaking Bad,” but it definitely lives in that world. “Bad” was known for presenting unique camera angles and exploring its world with striking visuals and sound.

“Saul” moves faster, but it has that same sense of mood and atmosphere. Scenes are set through lighting, sound and visuals in a way that you actually notice and appreciate. It’s television as artisitic expression rather than just pointing the cameras at the actors and having them read lines.

On top of that, “Saul” features the same level of dialogue and acting performances that “Bad” had. It’s as if the crew didn’t skip a beat and this is just the next season of “Breaking Bad.” Only this season is told primarily as a flashback to Saul Goodman’s early years and Bryan Cranston and Aaron Paul are nowhere to be found … which is actually pretty high praise.