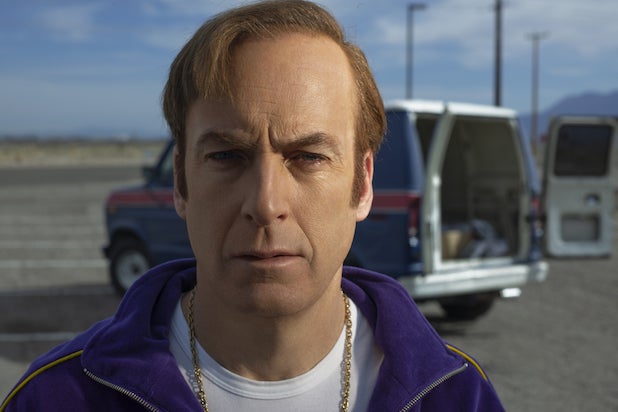 We already know “Better Call Saul” is going catch up to the timeline of its predecessor “Breaking Bad” in some way during the upcoming fourth season, but does that mean Easter eggs, or will the stories become parallel narratives?

Showrunners Peter Gould and Vince Gilligan wouldn’t say for sure, but they did indicate that they’re considering the latter possibility at the “Better Call Saul” panel Thursday afternoon in Hall H at San Diego Comic-Con.

In response to a fan asking if “Better Call Saul” will ever catch up to “Breaking Bad” and run in a parallel timeline, a la “Rosencrantz and Guildenstern Are Dead” — which is set in the background of “Hamlet” — Gould said “I’d like to see that. We’ll see.”

Although Gould and Gilligan didn’t confirm whether that’s something they’ve got cooking already, their responses definitely made it seem like the idea isn’t brand-new to them.

Gilligan previously divulged that the upcoming Season 4 will have some scenes that take place in the “Breaking Bad” timeline.

“We have a subplot that very squarely gets into ‘Breaking Bad’ territory and brings us into the world — or at least points us on a path toward the world — of Walter White,” Gilligan told Entertainment Weekly. “I can’t wait for folks to see that.” He added in that interview that the scenes would at least involve Saul (having by then taken on the pseudonym over his birth name, Jimmy McGill). Saul Goodman first appeared in “Breaking Bad” midway through the second season, in an episode aptly titled, “Better Call Saul.”

But whether or not the entire show will get to that point remains to be seen.

“We’re still trying to figure it out,” Gould said at Thursday’s panel.