“Better Call Saul” star Bob Odenkirk and masterminds Vince Gilligan and Peter Gould just changed everything we thought we knew about Jimmy McGill/Saul Goodman’s life in Omaha: It turns out the black-and-white sequences on “Saul” may take place when Walter White is still alive.

Wait, we hear you saying. What? We had the same reaction. The Omaha sequences on “Saul” — brief segments that hint at Saul’s sad life after he fled Albuquerque to live undercover — suggest Gene is still living in fear because of his life as Saul. (The Season 4 premiere spelled this out more explicitly than any episode before.) On the “Better Call Saul Insider” podcast released this week, Odenkirk, Gilligan and Gould raised the possibility that Saul might be living in fear of Walter.

Remember that in the penultimate episode of “Breaking Bad,” titled “Granite State,” Saul was eager to part ways with Walt. Walt wanted Saul to stay with him, and help him get revenge on the neo-Nazis who robbed him of barrels of money. Saul went off to Nebraska, and we never saw him again on “Breaking Bad.” Walter spent months in New Hampshire, before finally returning to Albuquerque to make his last stand.

When we met Saul again in “Better Call Saul,” in Omaha, no one told us how much time had passed since his split with Walt. Yes, we saw Walt die in the finale of “Breaking Bad” — but we don’t know when the Omaha scenes take place in relation to “Breaking Bad.” They might occur during the stretch of “Granite State” when Walt is hiding out in Nebraska.

Odenkirk pondered on the podcast whether Walt’s death could free Jimmy/Saul/Gill from his monk-like existence in Omaha.

“Speaking as a fan, if Walter White dies… and that’s on the news in some capacity, I don’t know. Does that make him think, ‘I can come out from hiding?'”

“Do we even know in our Omaha sequences, our Gene sequences, Do we know… I mean, has it happened yet?” Gilligan said, referring to Walt’s demise.

“We haven’t defined that. We haven’t said how long Gene has been… in Omaha,” Gould responded.

“And a good question,” Gilligan said. “It’s one that will have to be answered at some point, like a lot of these things.”

Gilligan has said he is “desperate” to find a way to get Walter White and Jesse Pinkman (Aaron Paul) onto “Better Call Saul.” Maybe this gives him a window.

Look at a map of the United States. If Walter White decided to stop in Omaha on his drive from New Hampshire to Albuquerque, he wouldn’t have to take too much of a detour to stop in Omaha for a Cinnabon.

How would he know where Saul was? Well. As “Granite State” showed us, he spent several days rooming with Saul before they parted ways — but after Saul took a photo for his fake Nebraska driver’s license. And Saul told Walt, right before they parted, “If I’m lucky, a month from now, best case scenario, I’m managing a Cinnabon in Omaha.” 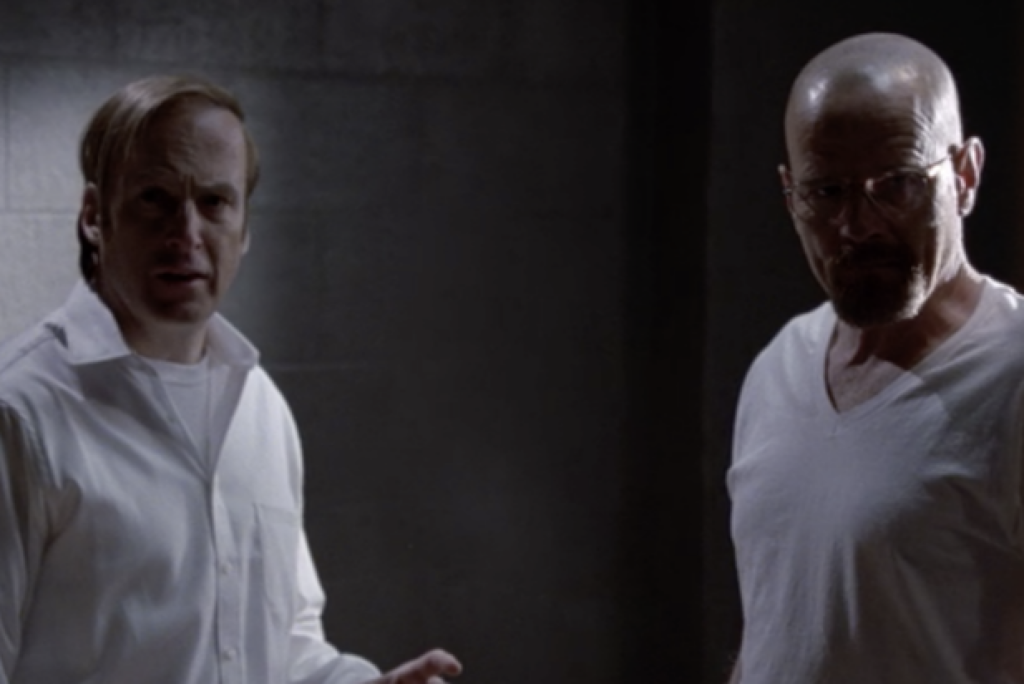 Saul and Walt’s last moments together in “Granite State”

It seems likely that Saul didn’t pull this possibility out of thin air — and extremely unlikely that if he did, his random possibility would come true precisely.

It seems more likely that at some point, Ed the disappearer (Robert Forster) tipped off Saul about the identity he would take on undercover. Perhaps Saul discussed his Nebraska plans with Walter more specifically off-screen.

Whatever happened, the interview with Gould, Gilligan and Odenkirk opens up a lot of possibilities. We can imagine worse endings for “Better Call Saul” than Walter White showing up unexpectedly in an Omaha sequence to resolve some old business with Saul/Gene.

Everyone involved in “Better Call Saul” has said it will eventually overlap with “Breaking Bad.” But if Walt is still alive when Saul is in Omaha, it already has.