FX’s critical acclaimed comedy “Better Things” returns for Season 5 at the end of the month, and on Thursday, FX whetted fan appetites with a heartwarming trailer full of Sam Fox’s family.

There appears to be plenty of family moments — and even a trip to grandma’s England — for Sam (Pamela Adlon) and her three daughters, Phil (Celia Imrie), Max (Mikey Madison) and Frankie (Hannah Riley).

Here’s a logline for the final season: “‘Better Things’ focuses on ‘the road ahead’ for its unconventional, unfiltered heroine, Sam Fox (Pamela Adlon), so devoted to her life as a working actor and single mother of three that she’s left little time for that one elusive thing: herself. As she navigates three daughters, each coming of age; the challenges of her chosen career; and her mother’s increasing signs of aging (as well as her own)—Sam embraces each moment, and each member of her family, with a fierce love, raw honesty and biting humor. As each of the Fox women come of age into the next phase of their life, they are inspired to reevaluate themselves, learn from the past and find their own direction.”

The series premieres on Monday, February 28 at 10 p.m. ET/PT on FX and streamer Hulu. New episodes air each subsequent week. 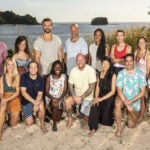