“Golden Girls” alum Betty White died due to a stroke.

According to the death certificate obtained by TMZ, White died after suffering a cerebrovascular accident, which is the medical terminology for stroke.

White suffered the stroke six days before her death, according to the report obtained by the website.

A rep for the Los Angeles County coroner’s office didn’t immediately respond to TheWrap’s request for comment on Monday. 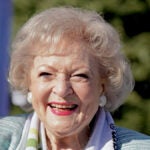 “Even though Betty was about to be 100, I thought she would live forever,” a statement from her rep at the time read. “I will miss her terribly and so will the animal world that she loved so much. I don’t think Betty ever feared passing because she always wanted to be with her most beloved husband Allen Ludden. She believed she would be with him again.”