There hasn’t been a misanthrope this lovable since Kaufman and Hart wrote “The Man Who Came to Dinner” in 1939. The big difference between their Sheridan Whiteside and Walter “Pops” Washington in “Between Riverside and Crazy” is that the Stephen Adly Guirgis character invites everyone not only to dinner but to live with him.

The drama, which opened Monday at the Helen Hayes Theater, is nearly a time-capsule reproduction of its original 2014 production at Off Broadway’s Atlantic Theater Company.

As before, Austin Pendleton directs. The only switch in the cast is Common, who makes his Broadway debut here, taking over from Ray Anthony Thomas in that original Atlantic ensemble. Playing Pops’s son, Junior, the Grammy- and Oscar-winning rapper will be the main reason many theatergoers choose to see Guirgis’s dramedy about an ex-cop (Pops) who continues to wage a years-long discrimination suit against the police department for being accidentally shot by another police officer.

When Common walks on stage, he receives the night’s second round of applause. The first comes when Walter Spangler’s elegant but in-need-of-a-paint-job Riverside Drive apartment stops spinning around on its turntable set at the top of the show. It’s pretty much the same set that also garnered an early ovation on the smaller Atlantic Theater stage. 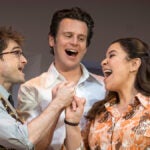 Also Read:
‘Merrily We Roll Along’ Off Broadway Review: Jonathan Groff and Daniel Radcliffe Try to Resuscitate a Sondheim Flop

Common, who has appeared in several movies as well as the TV series “Hell on Wheels,” makes a respectable Broadway debut. Junior is arguably the least showy of roles in a play that is otherwise loaded with them. Again, Pendleton’s direction allows two of the actors playing Pops’s guests to grab too much attention, not to mention most of the laughs. Victor Almanzar and Rosal Colon reprise their roles of Oswaldo, an ex-drug addict friend of Junior’s, and Lulu, Junior’s ex-prostitute of a girlfriend.

Both have taken up residence in the Riverside Drive apartment and call Walter “Pops” even though they are not related to him. While one might be tempted to criticize the direction and/or the actors for overplaying their roles, Guirgis has written Oswaldo and Lulu in broad strokes. In the second act, when someone asks Lulu the “prognosis” on Pops’s medical condition, she answers, “Oh, it’s pneumonia now, not prognosis.” It’s the kind of easy cheap shot that undercuts the much-lauded playwright’s reputation for rounded portrayals of economically challenged characters. In one switch from the original Atlantic production, Pendleton has radically softened Oswaldo. At a crucial moment in the drama, the character now throws up discreetly into an umbrella stand rather than depositing his vomit in a big chair in the living room.

“Between Riverside and Crazy” won the Pulitzer Prize for drama in 2015, and there’s no arguing with the brilliant creation of Walter “Pops” Washington, whose every utterance of contempt for humanity is as clear-eyed as it is unerringly correct. Playing that aggrieved man who treats his guests Lulu and Oswaldo much better than his own son, Stephen McKinley Henderson replicates his exceptional original “Pops” portrayal while showing no signs of wear and again achieving maximum effect with the least amount of effort.

He devastates his adversaries with the flick of a finger or by raising his body temperature a degree or two. There are some truly great performances on Broadway this season, but none is more impressive than Henderson’s turn in “Between Riverside and Crazy.”

“Between Riverside and Crazy” is a play where everyone, including Pops, is a con artist. Guirgis takes his time to expose the duplicity of each of his characters, and the scenes between Pops and the voodoo Church Lady (Liza Colon-Zayas) and his former NYPD partner, Detective O’Connor (Elizabeth Canavan), and her fiancée, Lieutenant Caro (Michael Rispoli), show a major talent writing at full and breathtaking speed. These four gifted actors know precisely how to jockey with each. They do the playwright’s poker-game of words full justice. 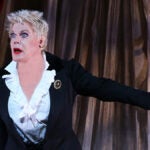 Also Read:
‘Great Expectations’ Off Broadway Review: Eddie Izzard Is a Pip – and All the Other Characters, Too
x