In the episode, Sonny will attend a family dinner. It’s not known if he’ll bring girlfriend Amanda Rollins (Kelli Giddish) along to meet Mama Carisi.

Ryann Shane, who plays Carisi’s niece, Mia, will also be featured in a March episode. 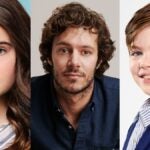 D’Angelo had a recurring role as public defender Rebecca Balthus in Seasons 5 and 9 of the long-running crime procedural.