Donald Trump supporter Betsy McCaughey is getting a lot of buzz — literally.

Beyonce’s fan base, nicknamed the BeyHive, swarmed McCaughey’s most recent Facebook post with comments and bee emojis after the frequent cable news guest criticized Hillary Clinton on “CNN Tonight” for being a hypocrite, since Clinton bashed Trump over lewd comments about groping women, but enjoys the superstar singer’s music.

“Hillary Clinton expresses that she finds the language on that bus horrific, but in fact she likes language like this: ‘I came to slay b—, when he f– me good, I take his ass to Red Lobster,'” McCaughey said Monday night on CNN. “That happens to be a line from Beyoncé, her favorite performer, whom she says she idolizes and would like to imitate. … There’s a lot of hypocrisy of Hillary Clinton expressing such horror.”

“The fact that you even tried to equate LYRICS about rewarding consensual sex to QUOTES from the man running for president about groping women’s genitals unconsenually [sic] is such a reach it’s actually ridiculous,” explained Armani Maldonado in his comment.

The “Lemonade” artist’s fans were in utter disbelief at McCaughey’s Beyoncé slander.

“Quoting Beyoncé and trying to use that against Hillary Clinton, what is wrong with you?” commented one user, who goes by the name of Li Longo on Facebook.

Also Read: Trevor Noah Rips Donald Trump: 'It's Not the Locker Room, It's You, Motherf--er' (Video)

The former New York Lt. Governor should have probably already known not to speak ill of Queen Bey.

See McCaughey’s post and the comments that followed below. 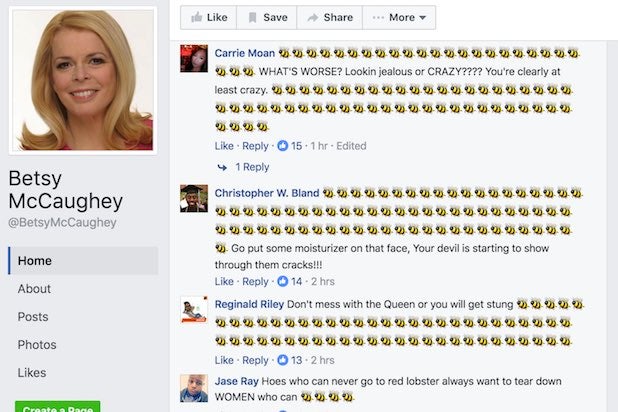