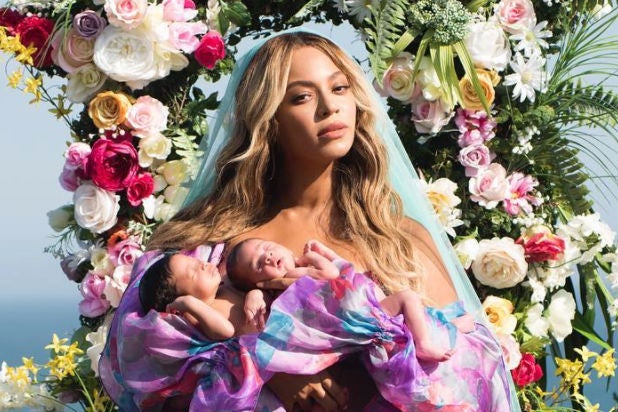 Beyonce has released the first official photo of she and Jay-Z’s newborn twins.

An etherial photoshoot in Malibu sees the Grammy winner posing with both babies, celebrating their four-week milestone in one of the world’s most famous families. It was posted to her Instagram account Thursday night.

“Sir Carter and Rumi 1 month today,” the singer wrote in a caption. In flowing pastel robes, Bey looks every part the Madonna and child (or children in this case).

Also Read: Beyonce Drops Out of Coachella, Will Perform at 2018 Festival

Reports that Beyonce had given birth surfaced on June 17, though her own math suggests they came five days prior. She announced her double pregnancy in February  with an instantly-iconic photo shoot that sparked a storm of memes on Twitter.

A trademark filing from family attorneys hinted that the fraternal twins were indeed named Sir and Rumi, which Bey now confirms.

While spotted on social calls around Los Angeles, the superstar has not been present in public life since her memorable “Lemonade” reprise at the Grammy Awards earlier this year.

Her husband did get some work done this month with the sudden release of his 13th studio album — the critically acclaimed “4:44.”

It’s unclear if Mrs. will return to work before next April, where she’ll headline the annual Coachella Valley music festival. The performance will be a make-good for this year, when she stepped down as headliner thanks to her pregnancy.