Jeff Bezos has been interviewing candidates to be the new executive editor of The Washington Post, which he owns, according to a biographer.

On Sunday, “Amazon Unbound” author Brad Stone said in an interview on CNN, “Last week, I understand that Bezos was in Washington and interviewing some of the finalists for that role of executive editor.”

He pointed out that CEO Fred Ryan has been leading the search until now. 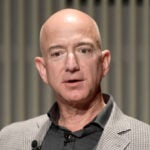 A representative for the paper had no comment on Bezos’ involvement or the hunt overall, which began when Marty Baron announced in January he would be vacating the role.

Past reporting has indicated that Bezos has been hands-off at the paper, which is probably for the best, given how frequently the Post has to cover Amazon, its dominance in e-commerce and tech and the various efforts by its employees to unionize. With his reported interest in the outcome of the executive editor search, that seems poised to change.

In a note to staff in January, Baron explained that he decided two years ago to stay “through the presidential election,” and with that behind him, plans to take his leave.

Baron reflected on his role in the past few decades of American news coverage and what he was able to witness firsthand in that time, taking care to point out stories the Post is credited with breaking. The Post won 10 Pulitzers under his leadership, as well as many other awards.

During his Sunday appearance on CNN’s Reliable Sources, Stone heralded the successes the Post has seen recently, too: “We have to admit that the turnaround of the Post has really been remarkable. This was a newspaper in kind of melancholic decline seven years ago and now, you know, 3 million digital subscribers, three [times] what it was a couple of years ago…”

Stone noted that much of the Post’s good fortune could be attribute to “being a D.C. newspaper in the age of Trump” and that Bezos – who “really doesn’t care for unions” – could clash with the Post’s guild going forward. Still, he lauded the billionaire, concluding that “the job he has done at the Washington Post has been remarkable.”