Meanwhile, former Chicago mayor Rahm Emanuel will be nominated to be Ambassador to Japan and former State Department official Nicholas Burns is expected to serve as the ambassador to China.

Garcetti’s nomination to the post of ambassador to India would need to be approved by the U.S. State Department. 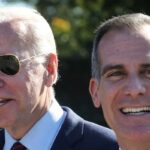 Right now Garcetti’s term as mayor of Los Angeles lasts through 2022. If he departs the position for the new ambassador post the LA City Council would either need to temporarily appoint someone to fill the role or hold a special election for a new mayor.

Garcetti’s office did not immediately respond to TheWrap’s request for comment.