Colleagues and admirers alike are remembering Rep. John Lewis’ legacy of “good trouble” one year after the civil rights pioneer’s death, with many tributes spurring action on his “final marching order”: the Voting Rights Advancement Act.

Saturday marks the one-year anniversary of Lewis’ death at age 80. At the time of his passing, the John Lewis Voting Rights Advancement Act, aimed at strengthening the government’s response to voter discrimination, had passed but Republicans are currently blocking the proposal through a filibuster. The act harkens back to Lewis’ roots as a key figure of the civil rights movement of the 1960s.

Check out some notable tributes to the “King of Good Trouble” here. 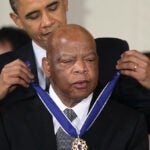 “Days before he died one year ago today, Jill and I spoke with John Lewis for the last time,” President Biden tweeted. “He asked us to remain focused on the unfinished work – his life’s work – of healing and uniting this nation. With John’s spirit guiding us, we must be unafraid and never give up.”

Former president Barack Obama, who awarded Lewis the Presidential Medal of Freedom in 2011, tweeted, “John Lewis and C.T. Vivian loved this country so much that they risked their lives so that it might live up to its promise. They gave all of themselves to the cause of freedom and justice, and inspired generations to follow their example. Now it’s up to us to continue the work.”

Former FLOTUS Michelle Obama directly referenced the John Lewis Voting Rights Advancement Act in her post, reflecting on Lewis’ “legacy of perseverance; his ability to find moments of joy and lightness in the midst of real struggle” as the country recommits to “building the future he envisioned.”

Former president Bill Clinton also paid his respects on Twitter, writing that the best way we can honor Lewis’ life is by “following his final marching order” and “fighting voter suppression and passing strong laws that ensure every citizen can vote and have their vote counted.”

A number of candlelight vigils will be held nationwide Saturday night to commemorate Lewis’ passing and to encourage Congress to pass the John Lewis Voting Rights Advancement Act. Earlier in the day, House Speaker Nancy Pelosi and actress Alfre Woodard christened the Navy ship USNS John Lewis in his honor. 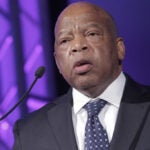