“Big Brother” is down to its final three houseguests of the season, with Kyland getting the boot on Thursday night. He didn’t handle his eviction well though, and it nearly resulted in a physical altercation between him and Xavier.

First, let’s recap how we got here. After the second double eviction in as many weeks, Xavier became the head of household on Sunday night. Though he had a final two deal with Kyland, Xavier recognized him as a serious competitor and, figuring he had a better shot at winning next to Azah or Derek F., put Kyland on the block.

On Wednesday, Xavier won the power of veto, giving him all power in the house. And when push came to shove, Xavier kept his nominations the same, convincing Big D to use his single vote to evict Kyland. Of course, considering Kyland had final two deals with both men, he was stunned — and he touched a nerve with Xavier on his way out.

In questioning why he was totally blindsided, Kyland invoked Xavier’s nephew, Kobe, saying that Xavier was setting a horrible example of how to be a man. “I think that if your nephew has nobody to look up to, that is gonna figure out how to raise him and teach him how to be a man…” Kyland said before getting cut off.

“I highly suggest you stop talking about my nephew,” Xavier answered menacingly. You can watch the full exchange in the video above. 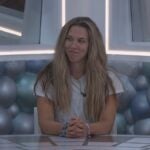 As Xavier and Kyland progressively start more in each other’s face, both Azah and Derek tried to diffuse the situation, before host Julie Chen Moonves came over the house sound system and ordered Kyland to leave. It took a few stern commands from Julie, but finally, Kyland exited the Big Brother house.

Though it didn’t ever come to physical blows between the two, fans were certain that had the conversation lasted a few more seconds, it would have.

“That 750k was about to be used for Kyland’s hospital bills,” one fan tweeted. Another called it “the most memorable exit” that has ever happened on the show.

You can check out more reactions to the moment below.