“Big Hero 6” moves to the small screen on Monday night, swapping the 3D animation of the original for a more traditional, hand-drawn look.

But other than its new look and different medium, the Disney XD series aims to retain the key elements that made the original movie such a hit with audiences.

From “Kim Possible” executive producers Bob Schooley and Mark McCorkle, “Big Hero 6: The Series” features much of the film’s voice cast, including stars Ryan Potter and Scott Adsit, and same cultural mash-up world of San Fransokyo. Most important to Schooley and McCorkle, however, was recapturing the film’s sense of adventure.

Also Read: Women Animators Pen Open Letter on Sexual Harassment: 'This Abuse Has Got to Stop'

“When we saw the movie, and it comes to that ending where they’re flying at the camera, it clearly feels like the adventures are just getting started,” Schooley said in an interview with TheWrap. “So when we saw it three years ago, and there was talk about potentially turning it into a TV series, it was a no-brainer thing. Because every kid walking out of the theater is going to want to see more of these characters and what they do next. It definitely gave that feeling that big things are going to be happening.”

The series format presents the opportunity to explore that open-ended conclusion of the film and take the movie’s beloved characters to other parts of the world, where even the supporting cast will have their chance to shine.

“Everybody gets their chance,” Schooley said. “A series is actually nice when you have a big ensemble like this, to explore these characters more.”

Schooley and McCorkle also did a “radical rethink of the visuals.” Said Schooley: “We wanted it to be it’s own unique thing, and not just an imitation of the movie.” 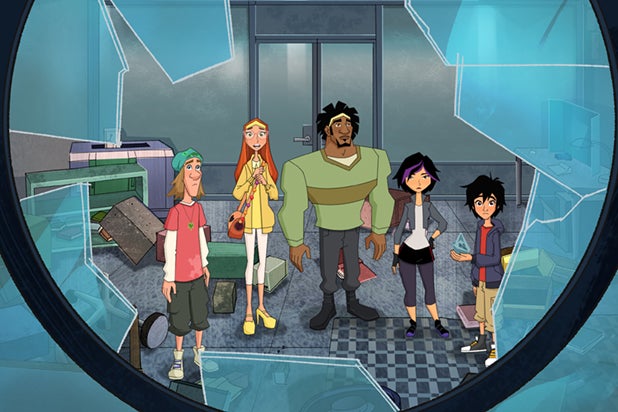 TheWrap: What makes “Big Hero 6” right for a TV adaptation?

Schooley: When we saw the movie, and it comes to that ending where they’re flying at the camera, it clearly feels like the adventures are just getting started. So when we saw it three years ago, and there was talk about potentially turning it into a TV series, it was a no-brainer thing. Because every kid walking out of the theater is going to want to see more of these characters and what they do next. It definitely gave that feeling that big things are going to be happening. And for us, it was just in our wheelhouse. That comedy-adventure-heart combo, which was sort of unique in the movie, is kind of what we’ve done a lot in the past. So it felt like a really natural fit for us to take it on and continue on the adventures.

Does the series preclude the possibility of a movie sequel?
McCorkle:I don’t think so. I think this is going to live on as a series. We’ve never heard anything one way or another. I can’t really give a definitive answer, but the movie was fantastic, so I can certainly see that happening.
Schooley: Hopefully the show will be such a big hit that there’ll be a big appetite to do another movie. When we were first developing the show, we met with the directors and the producer of the movie a few times. And at that point there was certainly nothing in the works, but who knows.

What are some of the benefits of doing it in a series format?
Schooley: By definition, you’re running time per episode, per story is shorter. So it definitely has different storytelling rhythms. There might be an episode that focuses on Hiro having an emotional issue or challenge, but we also put the spotlight on Fred and Wasabi and Honey Lemon and GoGo. Everybody gets their chance. A series is actually nice when you have a big ensemble like this, to explore these characters more.
McCorkle: And when you have a world that’s so intriguing like San Fransokyo was, I think that was such an appealing cultural combo, that being able to expand upon that in a way that you can’t really do in a movie or even a sequel, is something that lends itself really well to the TV series treatment.

What are the key elements that the show needs to have in order for it to feel familiar to fans of the movie?
Schooley: One thing has to be that Hiro-Baymax relationship. It’s just so important. Working with Ryan [Potter] and Scott [Adsit], who voice the characters, they’re great keepers of the flame.
McCorkle: Both of them have really inhabited those characters and own them. And they let us know if we’re drifting from who those characters are, and we can correct. One of the things in the movie, one of the things I was excited about when I saw it was, it was sort of a celebration of smart science, and using science to solve problems. Things that, in this world, are good things to put out there. The series is definitely doing that as much as we can … And that nonchalant diversity was such a part of the fabric of the movie. Of the world of the movie, but also this group of friends. And that’s something that has to be in the series.
Schooley: It gives it a very contemporary, real feel, I think. 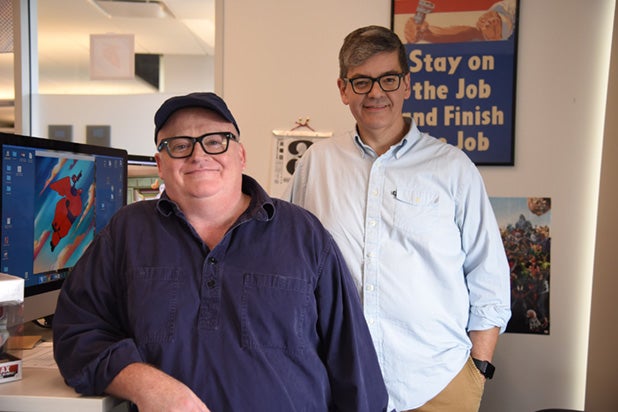 You brought back a lot of the original voice cast for the series, but had to recast a couple roles. What were you looking for in that process?
McCorkle: They were big shoes to fill. T.J. [Miller, who played Fred in the movie] especially. I feel bad for how many people auditioned for that. We were looking for that sort of offbeat take with the sweetness at it’s core.
Schooley: Brooks Wheelan has really delivered for us. His innate sweetness really comes through.
McCorkle: And there’s a youth to him that feels right. It’s funny, when we go through the episodes after they’re finished and go back through the script. At least two-thirds of his lines, he’s put some spin on.
Schooley: There’s always something where he leaves his mark on the performance. And Khari Payton [replacing Damon Wayans Jr. as Wasabi], we’ve worked with before. He’s incredibly versatile. He can do dramatic moments, but he’s also incredibly funny and has great instincts.

Tell me about the decision to go with traditional animation for the series over the 3D animation used in the movie.
Schooley: We felt at the very beginning, we wanted the series to live and breathe as it’s own thing. And that radical rethink of the visuals– we wanted it to be it’s own unique thing, and not just an imitation of the movie.
McCorkle: And it was a practical thing. That movie, the CG on it was absolutely gorgeous. For TV, you’d have to make compromises on that. The directors actually pitched it to us [as 2D animation] … and we were already leaning in that direction.
Schooley: This — unlike many show’s we’ve worked on — in the development process, almost every instinct we had or choice we made was confirmed.

I also want to ask you about the open letter signed by more than 200 women in animation demanding an end to sexual harassment in the workplace. What can you do as showrunners to make sure women on your own crew feel safe?
Schooley: Our art staff is probably fairly evenly split. We were very driven up front to reflect the diversity in the crew. And our writing staff is three women and one guy, which is kind of the reverse of the typical. They’ve been our staff for a year and half now, so it just felt natural to go in that direction. Other than trying to be good people, we definitely are aware of trying to even out the bench. And when you go to the CTN expo this weekend, even a few years ago, I was sort of struck by how many more women were looking to get into the business than guys. The business just by natural forces has started to even itself out.
McCorkle: And as evidenced in that letter by how many names signed it, I think there’s progress being made. You’re seeing more shows with female directors and showrunners … one of the things that’s happening is that the animation community is diverse in both gender and ethnicity, and that is reflected in the staff. It didn’t have to be a huge effort, I think it’s the community.

“Big Hero 6” premieres with the hourlong episode “Baymax Returns” on Monday, Nov. 20 at 8/7c on Disney and Disney XD.

14 TV Shows You Forgot Were Based on Comics (Photos)