There were lines around the block in Nottingham … but it was still all about “Iron Man” here in the U.S.

Universal Pictures’ Ridley Scott-directed adaptation of “Robin Hood” premiered to $37.1 in North America, according to Sunday estimates, meeting almost exactly the rather unspectacular pre-release projections for the robustly budgeted project. 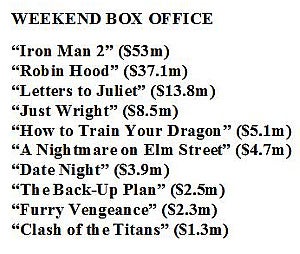 However, the film, which stars Russell Crowe and Cate Blanchett, debuted big internationally, scoring $74 million at 6,944 locations in 56 territories. It was the second biggest international opening ever for Universal, trailing only 2005’s “King Kong” ($84.3 million).

“Our strategy to open this movie day-and-date internationally worked for us,” said Universal distribution chief Nikki Rocco. Still, she added, the international opening was about $15 million above what the studio expected.

Despite dropping slightly more than anticipated (60 percent) from its whopping $128.1 million premiere a week ago, Marvel’s “Iron Man 2” had enough juice left in its ticker to finish No. 1 at the North American box office with $53 million, giving it a domestic total of $212.2 million after two weeks.

Meanwhile, youth drama “Letters to Juliet” starring Amanda Seyfried and Vanessa Redgrave debuted in third place with $13.8 million at 2,968 domestic locations, which was significantly less than the $17 million opening that the studio had been anticipated for the film.

Budgeted at $30 million, before rebates and pre-sales are factored in, “Juliet” hit its gender mark, garnering a solid “A-minus” CinemaScore ranking from an audience that was 81 percent female.

Curiously, given the film’s youth-targeted themes, 63 percent of those audience members were above the age of 25 — perhaps a result, Summit distribution head Richie Fay speculated, of having big tentpoles like “Iron Man 2” and “Robin Hood” successfully siphoning away a big portion of the younger female audience.

“It’s on the low end of our expectations,” he conceded, “but it’s certainly in the range of our ending up comfortable with it. Given the multiples, we should turn out fine with it.”

Overall, the domestic box office was flat with the same weekend last year, which featured the premiere of Sony’s “Angels and Demons.”

Among holdovers, DreamWorks Animation’s “How to Train Your Dragon” has successfully extended its run all the way up to the release of the next DreamWorks 3D movie, “Shrek Forever After,” which debuts next weekend.

Dropping just 24 percent in its eighth weekend, “Dragon” finished in fifth place with $5.1 million, bringing its domestic total to $207.8 million.

Also holding up well has been CBS Films’ J.Lo movie “The Back-Up Plan,” which grossed $2.3 million this weekend to bring its four-week total to $34.1 million — right about even with its production budget.

The weekend’s big story, however, remained “Robin Hood,” which Universal says was produced for $155 million (although officials close to the movie say the number was higher than that).

Co-financed by Relativity Media, the film delivered an audience that was 56 percent male and 63 percent over the age of 30. It scored a B-minus grade from movie word-of-mouth tracker CinemaScore.

“It over-performed internationally and hit the mark here, and that has a lot to do with the appeal of Russell (Crowe),” Rocco noted.