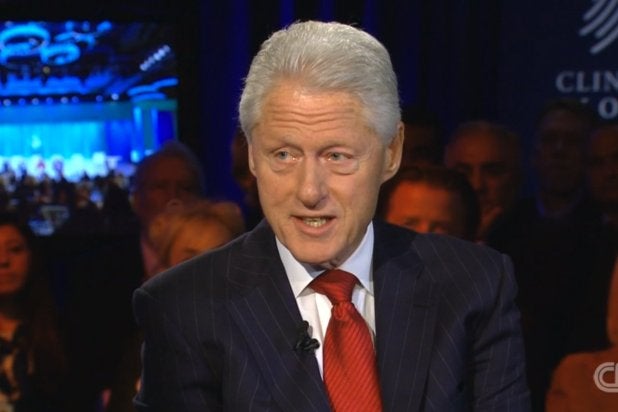 Bill Clinton made a surprise appearance Friday night at the after-party for a special screening of Barry Levinson‘s “Rock the Kasbah” in East Hampton, New York.

And it’s no surprise that press in attendance were eager to get the former president’s thoughts on GOP frontrunner Donald Trump and Vice President Joe Biden.

When asked how he thought Trump’s campaign was going, Clinton told Showbiz411: “I think we should let him burn himself out.”

On Biden potentially jumping into the Democratic presidential race against his wife, Hillary Clinton, he said: “I think we have to give him time to make the right decision for himself.”

The remarks on Trump come just a day after Hillary Clinton took a couple shots at the real estate mogul during a speech before the Democratic National Committee in Minneapolis, Minnesota.

Also Read: Hillary Clinton vs. Joe Biden Round 2: The Battle for Gay Hollywood Heats Up

Hillary mocked Trump’s notion that he would be far superior on women’s issues than Clinton.

“That’s a general election debate that’s going to be a lot of fun,” she told the crowd of supporters.

Hillary also poked fun at Trump’s hair in reference to an audience member at one of the GOP contender’s events asking him to prove his hair is real.

“A lot of people have said a lot of things about my hair over the years, so I do kind of know what Donald is going through,” she said to laughs from top Democrats at the summer meeting.

“If anyone wonders if mine is real, here’s the answer. The hair is real. The color isn’t,” said the former Secretary of State. “Come to think of it, I wonder if that’s true for Donald too.”