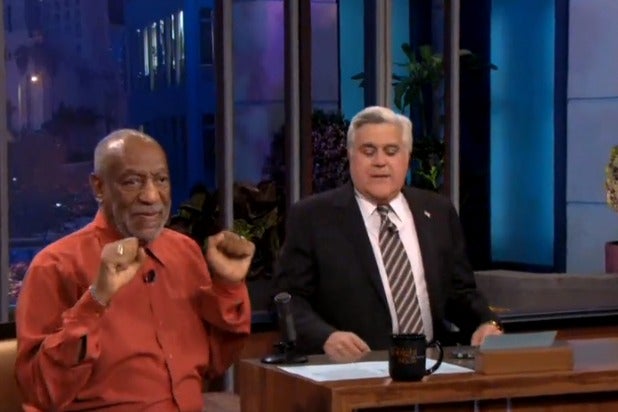 Some people only sound like everyone’s imitation of them when they’re in full-out performance mode. Barack Obama, for example, only sounds like Barack Obama while giving a speech. Christopher Walken is capable of not sounding like Christopher Walken for long stretches of time. Al Pacino realized at some point that he sounded too Al Pacino-like, and really needed to tone it down.

But Bill Cosby sounds perfectly like Bill Cosby — which is to say, exactly like Eddie Murphy‘s imitation of Bill Cosby. On Tuesday’s “Tonight Show,” he walked out with what Jay Leno called “the greatest entrance I’ve ever seen.” And he’s seen a lot of entrances.

It was pure Cosby — cool, patient, fake-doddering — though the Coz knew exactly what he was doing: Setting up a charming little bit about how old people fall down, versus how young people fall down, filled with delightful Cosbyisms.

The only thing missing was the sweater, because that would have been too much.

There was that little Cosby spin on key words — a little nasal, a little growly — and an almost-plaintive delivery of words ending in a long E: “Shee said to mee-eeee.” Gorgeous. Is it meeeee or did Jerry Seinfeld borrow a little of his intonation from the master?

It’s said that as we get older, we become more like the people we are. Bill Cosby, 76, is more Bill Cosby than ever.