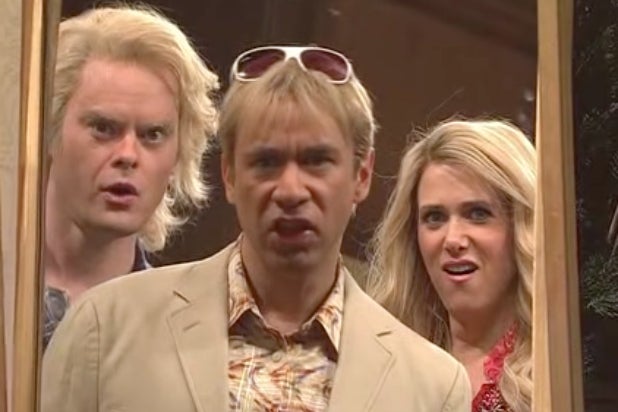 Bill Hader and Fred Armisen are responsible for many of the most memorable characters and sketches in “SNL” history — and TheWrap now knows how two of our favorite skits came to TV.

During a recent interview, we asked the “Portlandia” male lead exactly how much he and fellow former-“Saturday Night Live” star Kristen Wiig would know before hitting the “Weekend Update” desk as unprepared singers Garth & Kat.

He summed it up with one word: “Nonsense.”

“So, it was nothing. Empty head, and I would start it and Kristin would just follow,” Armisen told TheWrap during a sit-down interview at the Beverly Hilton Hotel. “It’s based on – we would goof around like that in the halls.”

“I remember, they would do that forever,” Hader chimed in.

The just-screwing-around-off-camera approach worked for the (actually written) “Californians,” too.

“That came from read-through,” Hader recalled. “It would be on a Wednesday after a break, and Lorne Michaels would take a while sometimes getting there, so you’d all be just waiting for him. And it would start with one of us going, ‘Oh, I just got back from L.A.’ ‘How did you get to your hotel?’ And they we would do those voices.”

“I went to Sunset and took a left on La Cienega …” he continued, gracing us with the voice of Wiig’s local home-wrecking handyman.

Hader, Armisen, and Kenan Thompson would use the accent-heavy Los Angeles navigation joke to the delight of one particular fellow cast member.

Still, it was just a tiny inside joke — until it became a huge one in the open. One Wednesday, with Hader out sick, Armisen and writer James Anderson adapted the silliness into a soap opera. Hader heard the news on Thursday; the rest is sketch comedy history.

Hader and Armisen will return with Season 2 of IFC’s “Documentary Now!” on Wednesday, Sep. 14 at 10 p.m. We’ll have more from our interview with the two “SNL” alums in the future.