For his last “Real Time” of 2021, Bill Maher used the mid-credits gag for the joke he always does just before going on a break — “future headlines,” where he imagines some jokey news items that might happen while he’s off the air.

This installment was a grab bag of extrapolations of current events to their logical, or illogical endpoint — Fox News’ ever-increasing right wing bent, Britney Spears, straw man versions of progressive politics and so on. And I’ll be honest, some of them are so conceptually bleak and awful I’m half expecting them to come true. I mean, you’ve lived through the last 2 years, right?

We’ll also just say, some of these jokes went after low hanging fruit, targets who don’t really deserve it, or straight up erected straw men, which is disappointing. Some of them were pretty funny however. I’ll just list them all here so you can judge for yourself, along with some commentary since it’s Friday night and we all might as well go on this party together. 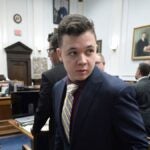 Of course, you can also watch the whole thing at the top of the page now.

Side note: At this point it’s probably time for everyone to stop mocking Spears’ mental health issues.

Just a reminder: The thing referenced here happened because the guy they picked to replace Alex Trebec wasn’t very well vetted and it turned out he’d once said a whole bunch of sexist things about coworkers on a podcast — and also was connected to a sexual discrimination lawsuit. So, not really as trivial as this joke.

3. Racist Karen Calls 911 on Anti-Mask Karen, Cop Karen Shows Up and Shoots Both

Another one I’m surprised hasn’t actually happened yet.

Honestly this would be hilarious. Biden should actually do that.

7. Leaked Facebook Memo Admits the Metaverse Is Just Going to Be Guys Jerking Off

Well that, or spreading fascist propaganda

8. Meghan Markle to Accept Bitcoin for Whatever It Is She Does

The second best cryptocurrency joke of the week.

10. Town That Voted to Defund the Police Wakes Up to Find Everything Gone