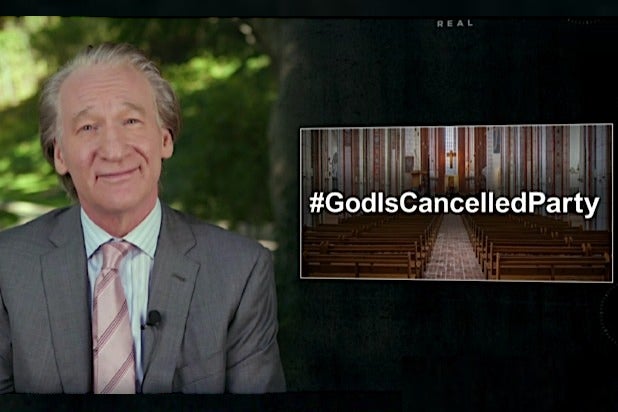 During the “New Rules” segment at the end of Friday’s “Real Time,” Bill Maher returned to one of his favorite things to complain about — so-called “cancel culture” — and in the process made a curious argument that seemed somewhat hard to parse in light of his history as one of the most outspoken atheists of modern times.

The rant, which advanced the point that as a culture we’re going overboard with denouncements of any association with America’s problematic past, centered around the joke that this can be taken to such an extreme “we’re gonna have to cancel God.”

Maher kicked the bit off by talking about Ryan Reynolds and Blake Lively, who apologized earlier this month for having held their 2012 wedding at a plantation in South Carolina. Restored Southern plantations have long presented themselves as romantic destinations but they’ve also been long criticized for whitewashing actual history. Since, you know, all of them were staffed by armies of slaves who for generations were abused and tortured by their masters. Those criticisms took on new life after the rise of national protests inspired by the murder of George Floyd, prompting people, like Reynolds and Lively, to apologize.

But Maher was really annoyed by that because, as he sees it, it’s impossible to go anywhere in America that isn’t the site of horrors. “If this is the new rule it’s gonna be hard to go to a lot of places in the South. It was kind of one big plantation,” he said.

Also Read: Maher: Trump, Confused by Kamala Harris, 'Didn't Know What Country to Tell Her To Go Back To'

Maher also noted how 30 years ago in New York City, construction on a building unearthed a previously forgotten mass grave for slaves apparently from the 1600s. “Among the businesses that stand over that ground today are a dance studio and a ballet academy. So people are literally dancing on those graves,” he said.

“America is ‘Poltergeist.’ We’re all six degrees from genocidal assholes,” he said. A fair point, though he didn’t explain how inadvertently living near the ruins of horrors from the past without knowing about it is identical to the deliberate preservation and celebration of such horrors. “If we start turning history into a big game of guilt by association, it never ends. Are we really going to make everyone apologize for standing somewhere that humans used to stand when they were even more barbaric than they are now?”

Adding that “every wedding, every funeral, every slip-n-slide on this blood-soaked land is inappropriate” given the facts of how America was built, he said “we can’t just pack up our government and pretend none of this country ever happened” and suggested instead the focus be on learning to”live in the present and make the future better.”

Maher did say he supports tearing down “statues of Confederate traitors,” but dinged some recent instances of overzealous people tearing down statues of people like presidents U.S. Grant and Abraham Lincoln. He also defended presidents Washington and Jefferson, who both owned slaves, because they were products of their time. That’s when then got to the part about canceling God.

“If being a product of your time is no longer an excuse, what I have to say about this guy?” Maher said, at which point a painting of Jesus Christ appeared on screen.

Then he went with the larger point, which we’ll just quote in full:

“The Confederacy used the Bible to justify their cause because it has plenty of passages from both testaments to back them up. ‘Slaves, obey your earthly masters.’ ‘Slaves, be obedient to your human masters.’ ‘Slaves, submit yourself to your masters.'”

“You see a pattern? If we’re gonna be consistent, I think we’re gonna have to cancel God. Jesus himself says at one point in the Bible, ‘The servant who knows the Master’s will and does not do what the Master wants, will be beaten with many blows.’ Thanks, Son of God.”

“Would you let those words slide if it was somebody’s tweet today? Jesus did heal a slave once, but not to free him — to get him back working. Because this is how slavery was back then. They didn’t see it as a problem because no one did. And if you had been back there, you wouldn’t have either.”

“You’re not better than Jesus or Ulysses S. Grant, you just came later. But I got to say that Jesus, you know being God and all, really should have known better. So when he comes back to judge the living and the dead, I say he’s got a lot of explaining to do.”

“Like, hey, you were always performing miracles. Instead of the bar tricks with the loaves and the wine, why didn’t you zap the chains off a slave? With all the preachings and the sermons on mounts, why not one time throw in a little ‘oh, and this whole people owning other people thing, that’s not right’?”

“But no, nada. On the subject of slavery, Jesus says sweet f—eth-all. So first thing when he gets back is, we’re gonna need an apology and I mean a real apology. Not any of this, ‘I’m sorry if my condoning of slavery caused offense’. I think rehab would be in order and also sensitivity training. Oh he can forget about hosting the Oscars.”

Also Read: Bill Maher Delivers a Fake Eulogy for Trump, and It's as Mean as You'd Expect (Video)

The funny thing about all this of course, is that Maher is, as we said above, one of America’s most outspoken atheists — he even made a movie about it in 2008. And the people being accused of “cancel culture” — such as protesters, or people who criticize New York Times columnists for the quality of their work and how they treat their coworkers, or for using their platform to harass and bully people — are not particularly known for religious zeal.

But we’ll admit, “we’re gonna have to cancel God” was a pretty funny line.