Comedian and host Bill Maher urges the attorney general to put Jan. 6 insurrectionists in jail before the midterms.

In Friday’s “Real Time with Bill Maher” on HBO, the host spoke with former Sen. Doug Jones and MSNBC host Ali Velshi about the glacial pace of the investigations into the Jan. 6 insurrections at the U.S. Capitol Building, with Maher urging Attorney General Merrick Garland to act fast and imprison insurrectionists before a midterm defeat can change the political landscape.

Jones said that the Jan. 6 investigating committee’s goal is not to put people in jail or to indict former President Donald Trump, but to let people know what happened with the attacks. 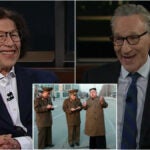 “But look, these hearings do have the possibility of, maybe not being a game-changer, but at least letting the public know what’s going on. And I think early on the January 6 commission did a very, very good job of just methodically and efficiently moving forward on trying to figure out what happened,” Jones said. “We have to remember that the role of the January 6 Commission is not to put people in jail. It is not to indict Donald Trump. It is not to indict anybody. It’s to tell people what happened in a nonpartisan fashion.”

“But who is going to put people in jail? If you don’t get put into jail for insurrection? Where does it stop?” Maher asked.

He continued: “It is the job of Merrick Garland, isn’t it? What? What are we waiting for? I mean, you know what? They got about six months before the election, which the Democrats are going to get wiped out. They’re not going to be a Democrat between Massachusetts and Pacoima. It’s going to be like Buffalo. I mean, they’re just going to be okay. And then the Jan. 6 commission becomes the Hunter Biden Commission, right?”