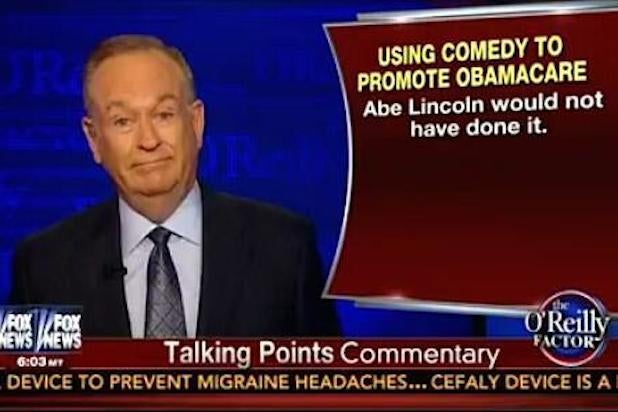 Would Abraham Lincoln have allowed himself to be interviewed by the likes of Zach Galifianakis? Bill O’Reilly says no.

Also read: President Obama and Zach Galifianakis Grill Each Other On ‘Between Two Ferns’ (Video)

“The video itself was causing the action that we’d hoped it would cause, which is getting folks to go to HealthCare.gov and look at the options available to them and hopefully enroll,” Carney said. “We obviously assess opportunities that we have and, you know, look at whether or not they’re going to be successful and wise and I think we made the right call here.”

“For a president under intense scrutiny to do a comedy show, raises some questions,” O’Reilly observed. “First of all, I don’t really have a problem with it in general: I think the timing hurts Mr. Obama, the economy continues to be problematic and Putin is clearly testing the president. It looks like Putin believes the president is a light weight, will a comedy video counter that?”

“I’m all for PR and if (Jay) Carney wanted to go on Funny or Die, fine but the president of the United States?” he asked incredulously. “All I can tell is you is Abe Lincoln would not have done it. There comes a point when serious times call for serious action. We’re a divided nation which talking points believes is in decline. Mr. Obama is quick, has a good sense of humor. Those are assets. But he needs to be aware. He needs to be aware of how his enemies perceive him because I believe the testing of America is just getting started.”

Historians may question whether O’Reilly– who wrote the best seller “Killing Lincoln”– is the best judge of the pop culture sensibilities of the 16th president. The Fox News host has faced scrutiny over factual inaccuracies in his book, which has caused the National Park Service’s Lincoln Home historic site in Springfield to shun selling it. After the Fox News’s rant lambasting Beyonce yesterday, perhaps the real anachronistic question of our time is would President Lincoln have considered “Partition” art?