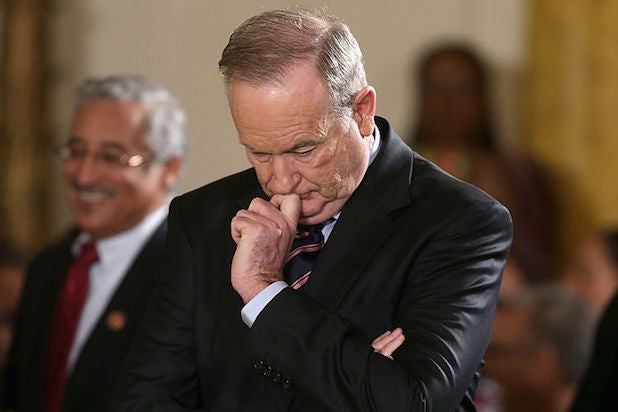 Bill O’Reilly went after groups that organized advertiser boycotts against his now-defunct Fox News show, but did not mention the scandal over multiple allegations of sexual harassment that led to his being fired, in his first return to the network on Tuesday.

O’Reilly appeared as a guest on Sean Hannity’s show to discuss a number of topics, including the recent wave of protests in the NFL, the investigations into President Trump’s connections to Russia and, somewhat obliquely, his disgrace and subsequent departure from the network.

The former “O’Reilly Factor” host took aim at the groups that pressured Fox News to fire him, saying that the campaigns were a threat to objectivity in the media. But he never discussed the sexual harassment scandal, in which it came out that FNC had paid out millions on O’Reilly’s behalf to settle sexual harassment lawsuits from multiple women, that fueled the advertiser boycott and was ultimately the reason he was fired.

“We’re living in a time when there are no more journalistic rules. And I can back that up 50 different ways, but I don’t want to bore everybody tonight,” he said. “There are no rules anymore. Your major urban newspapers aren’t newspapers, they’re left-wing journals and they coordinate,” he said. “People on the cable news shows on the other channels, they’re left-wing top to bottom.”

He went on to blame “big money” entities, singling out Media Matters, for the polarization in media. He did not address the reported $13 million Fox paid on his behalf, however.

Media Matters led the charge in calling for a boycott of O’Reilly’s show after a New York Times report detailing multiple sexual harassment allegations made against him. Media Matters President Angelo Carusone called on advertisers to remove their spots from O’Reilly’s show, which many did.

“What’s happened now is big money has poured in to organizations like Media Matters,” O’Reilly told Hannity. “You know, they threatened you and me if we did this segment tonight.”

“They threatened me just for allowing you to have a voice,” Hannity said.

Media Matters released a statement ahead of the segment on Thursday, objecting to O’Reilly’s reappearance on the network. “This emerging collaboration between Hannity and O’Reilly should be the end of Hannity’s Fox News program,” Carusone said.

“These totalitarians want to wipe out any speech with which they disagree,” said O’Reilly. “There isn’t a right-wing cabal that does that. I mean, the right can get hateful, everybody knows that. They can, but there’s not an organization that goes out an threatens people and boycotts sponsors.”

O’Reilly went on to say that the “insidious part” was the fact that people were being paid to organize boycotts. “There’s millions of dollars behind that,” he said. “And those people who are doing that are being paid to do that, big money.”

In the day’s leading up to O’Reilly’s departure from the network, advertisers pulled out of his show in droves, some of them issuing statements condemning sexual harassment. A similar tactic was used against Hannity earlier this year when he dedicated several shows to the debunked theory that the death of a Democratic National Committee staffer was somehow connected to Wikileaks.

“Hannity and I have discussed this off camera, and we’re going to fight back,” O’Reilly said. “I give you all the credit in the world. You fought back when they came after you last spring. I didn’t, but I should have.”

“There has to be an exposition by people like you and me about what’s really happening in this country because it’s dangerous,” he reiterated later in the interview. “They want to take freedom of speech away from their opponents. ‘They,’ being the left.”