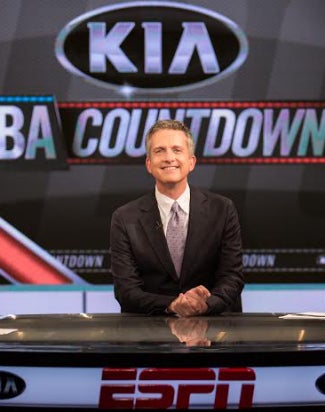 Bill Simmons — one of two coaches of Friday night’s NBA All-Star Celebrity Game — is one of the biggest names in sports journalism, but he became the news last month when his website Grantland published a profile of transgender golf club inventor Essay Anne Vanderbilt.

The story, by Caleb Hannan, came out Jan. 15 — despite Vanderbilt’s apparent suicide in October — and speculation ran rampant that Hannan’s probe into Vanderbilt’s mismatched personal past was a motive. After much deliberation, the Grantland staff published anyway; the backlash was gigantic.

“It was a really rough couple of weeks for the staff,” Simmons told TheWrap, reflecting on the story roughly one month removed. For lack of a better analogy, the man who calls himself “the dad” of the Grantland staff felt responsible for the heat that his employees took in the wake — especially Hannan.

Simmons published a lengthy apology, explaining the process and shouldering the blame for the editorial decision. A guest editorial from trans sportswriter Christina Kahrl was published the same day.

Simmons, the man who popularized turning reader emails into a column, told TheWrap that his inbox had never been more full than it was in the weeks between the post and our conversation. “Some of them were really smart, [some were] really angry — all of them were super thoughtful and made me think,” Simmons said.

We also spoke to Simmons about a more recent big sports story — the coming out of NFL prospect Michael Sam.

Sam will all but certainly become the first openly gay NFL player. He is considered a mid-round prospect — the point in the draft that Simmons correctly labels “a crapshoot.” Depending on when the young man is selected, there could be drama and mud-slinging.

“It makes for the most interesting post first-round subplot for the draft we’ve ever had,” Simmons said. “If he falls, it looks terrible.”

No matter when (or, suppose if) Sam is drafted, a media circus will follow — not unlike the one that surrounded former NFLer and Simmons’ current ESPN colleague Tim Tebow. There is a glaring difference in the Grantland chief’s analogy, he admits: with Sam, the circus may be worth it — whereas one surrounding a third-stringer like Tebow is more trouble than anything else.

Eventually though, Simmons expects the current and short-term future surge of press to go away: “People move on,” he said. “We saw that with Manti Te’o.”

“I also think this is the right guy,” Simmons added, speaking of Sam breaking the barrier. “He’s really thoughtful, I love the way he handled [the announcement]; he’s smart.”

Simmons hopes — and believes — that Sam’s courageous decision will open up the floodgates, little by little: “By the time next season starts, I would think four or five more [players] will be out,” he said.

“The Sports Guy,” which Simmons is affectionately referred to by fans of his ESPN column, will coach one of the NBA Celebrity Game teams, where a random draft left him with who would have been Simmon’s No. 1 pick anyway: “The only guy I really wanted was Michael B. Jordan,” Simmons, a huge “Friday Night Lights” fan said.

This time, 2014 train wreck Justin Bieber will predictably not be participating.

“I don’t think Bieber’s on any table, I think he’s off all tables,” Simmons said of the potential hot commidity’s involvement. “I think he lives in a house with no tables.”

Simmons will be coaching against best friend, former NBA star and and ESPN colleague Jalen Rose. The two pulled off an all-time trade in time for tip-off: Skylar Diggins of the Tulsa Shock for Elena Delle Donne of the Chicago Sky and six lobster tempuras. “You bring lobster tempura into the mix … you can’t think rationally,” joked Simmons, who arguably got the better end of the deal.

While just a fun celebrity game, there will be people taking it seriously. Simmons told TheWrap that Sportsbook.com created a betting line on the Celebrity Game, making his team — which also has two-time MVP Kevin Hart — five point favorites. A bet will be placed with Rose — whose team is headlined by Nick Cannon — though Simmons is not sure what to put up. “We haven’t figured that out yet,” Simmons told TheWrap. “Jalen’s an interesting guy, he doesn’t really have any vices. I’m gonna try to rope him into something — but it won’t be money.”

Simmons wants the stakes to be something that would embarrass the loser — it probably will not be too hard for the former “Jimmy Kimmel Live” joke writer to come up with something by tonight’s tip-off.