Orion Pictures celebrated the first day of Comic-Con@home with the release of a delightful new trailer for “Bill & Ted Face the Music,” plus a shiny new poster that almost makes you forget that the COVID-19 pandemic is probably going to cause the film to be delayed again. Watch the new trailer above.

Set nearly 30 years after 1991’s “Bill & Ted’s Bogus Journey,” “Face the Music” finds our excellent duo (Keanu Reeves and Alex Winter) adrift in middle age and mediocrity, having never actually gotten around to fulfilling their destiny to become the band whose music brings peace and harmony to the universe.

Now tasked by new a new group of future people (Rufus is a no show since, sadly, his actor George Carlin died in 2008) with finally getting around to it, they join their daughters (Samara Weaving and Brigette Lundy-Paine) to set things right — and along the way encounter a new batch of historical figures, a new villain, and their old friend Death (Willian Sadler).

Also Read: 'Bill & Ted Face the Music' Trailer: Keanu Reeves and Alex Winter Are Still Excellent to Each Other (Video)

The new clip gives us a much closer look at what all that means than the first trailer released more than a month ago. We already knew Bill and Ted were going to use their new time machine to go into their future and steal the music from a time after they’ll already have written it (time travel is fun). But now we know Death has more than a cameo, the people of the future are more than just worried, they’re annoyed by Bill and Ted’s apparently loserdom, and hey wait… did Future Woman say that the world-saving music is written by “Preston-Logan,” instead of “Bill S. Preston Esquire and Ted ‘Theodore’ Logan'”? Hang on, don’t Bill and Ted both have daughters with their last names?

Yes, the answer is yes, and judging from the trailer the girls get up to some time travel adventures of their own, recruiting great musicians from history to join their band. Sure does at least look like the film’s big reveal is going to be that they’re the Preston-Logan who saves the world.

But we doubt Bill and Ted will mind. For one thing, they’re really nice dudes, as evidenced by their congenial interactions with the huge prison-ripped versions of themselves. (Our guess: They’re the Evil Robot Usses from “Bogus Journey.” Sure, their heads were knocked off but they were robots. Robots can be repaired.)

But also did you catch the genuinely heartwarming scene at the end when Bill and Ted go to hell where they discover their imprisoned daughters? “How you doing?” asks Bill. “Well, you know, dead” says his daughter Theodora (Weaving). “And we’re in hell” adds Ted’s daughter, Billie (Lundy-Paine). “But, how you doing?” asks an extremely parentally concerned Ted. “We’re good!” the girls say, at which point everyone hugs. Awwww! 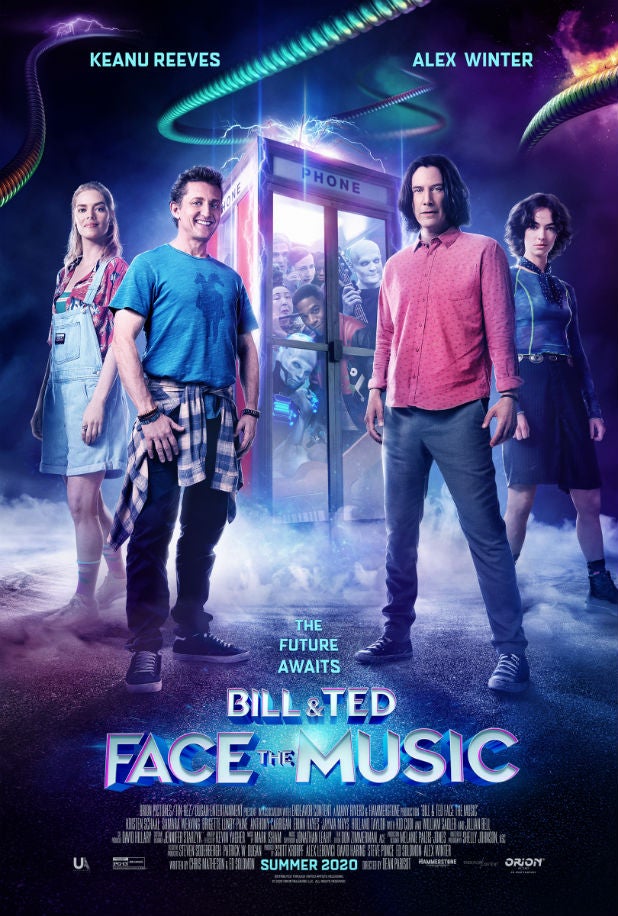 “Bill & Ted Face the Music” is scheduled for release on demand and in theaters Sept. 1 — assuming COVID-19 doesn’t have anything to say about it, anyway. Can we go to the future and steal the vaccine?